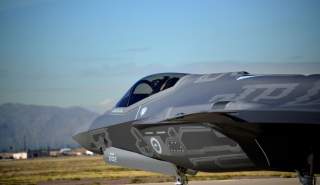 Fighter jets in 20-years may likely contain the next-generation of stealth technology, electronic warfare advanced, sophisticated computer processing and algorithms, increased autonomy, hypersonic weapons and so-called "smart-skins" where sensors are built into the side of the aircraft itself.

The new aircraft, engineered to succeed the 5th-generation F-35 Joint Strike Fighter and explode onto the scene by the mid 2030s, is now in the earliest stages of conceptual development with the Air Force and Navy. The two services are now working together on early conceptual discussions about the types of technologies and capabilities the aircraft will contain. While the Air Force has not yet identified a platform for the new aircraft.

Navy officials also add that the Navy is likely to develop new carrier-launched unmanned air vehicles other than UCLASS in coming years as well.

Maximum connectivity would mean massively increased communications and sensor technology such as having an ability to achieve real-time connectivity with satellites, other aircraft and anything that could provide relevant battlefield information

The new aircraft might also seek to develop the ability to fire hypersonic weapons, however such a development would hinge upon successful progress with yet-to-be-proven technologies such as scramjets traveling at hypersonic speeds. Some tests of early renderings of this technology have been tested successfully and yet other attempts have failed.

Super cruise technology would enable the new fighter jet to cruise at supersonic speeds without needing afterburner, he explained.

Smart aircraft skins would involve dispersing certain technologies or sensors across the fuselage and further integrating them into the aircraft itself, using next-generation computer algorithms to organize and display information for the pilot.