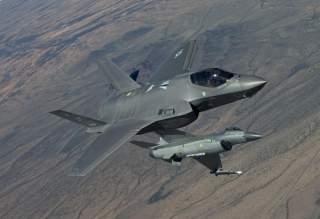 The U.S. Air Force faces a serious force structure dilemma. On the one hand, it desperately needs to modernize its fighter, bomber and drone fleets in order to be able to maintain air dominance in the decades to come. Fourth-generation aircraft will not be survivable in a high threat environment. Even today, integrated air defenses are forcing the Air Force to rethink how it achieves air superiority and at what price in terms of losses, both adversary and its own.

The primary role for the F-35A fighter, with its advanced stealth features, superb electronics suite and ability to share data is to operate in such high-end threat environments and help “kick down the door” for the fourth-generation platforms. But the growing threat to American dominance of the air is why the idea of restarting the F-22 fighter’s production line is being floated. Ensuring the ability of U.S. forces to hold at risk any target regardless of how well defended, is the reason that the ability to penetrate integrated air defenses is one of the key performance requirements for the new B-21 bomber. The Air Force also is mulling over the challenge posed by future integrated air defenses for its drone fleet.

On the other hand, it is virtual certainty that the Air Force, along with the Navy and Marine Corps, will spend most of its time in much less stressful operational environments. Lots of different platforms can be employed in such circumstances. In counterterrorism, counterinsurgency and stability operations, most flying hours are spent going to and from the operating area and just loitering.

Without question, a force designed for the high-end threat can address the demands of lower-end campaigns. Care to guess what platform has conducted the greatest fraction of close air support and battlefield interdiction missions against ISIS over the past year? The B-1 bomber. With its long-range, high speed ability to carry the full range of air-deliverable weapons and to stay on station for long periods of time, the B-1 has been repurposed from its Cold War mission of penetrating the then high-end threat.

But building a high-end force and then employing it for low-end missions is akin to owning a Ferrari but using it to transport your kid’s soccer team to practice. Not necessarily the best use of your asset and much more expensive than operating a car more suited to the needs of a soccer parent. This is true for the force structure the Air Force wants to build for the 21st Century. Even with the planned complement of 1,763 Air Force F-35As, the growing anti-access/area denial challenges in Europe, the Middle East and Asia make it likely that all of them will be fully occupied preparing for high-end operations and by doing so deterring major conflicts. Of course, in lower-end conflicts, some number of F-35s could serve as command and control nodes.

As it acquires fifth-generation platforms for the high-end threats and continues to upgrade its residual fourth-generation fleets so that they can play a role in the event of major conflicts, the Air Force should consider some focused investments in capabilities that are particularly well suited to the kinds of less stressing missions it is likely to be conducting in many parts of the world.  The most important objective of such an acquisition plan would be to lower the operations and sustainment (O&S) costs associated with providing air support in permissive environments.

There are platforms already available, some even in production, which would meet the Air Force’s needs. For example, the U.S. has a program called Light Air Support (LAS) to provide the Afghan Air Force with a robust, flexible and low-cost aircraft to conduct ISR and ground attack missions. Currently, there are eight A-29 Super Tucano aircraft operating successfully in that country. Lebanon is planning to buy the A-29 and Nigeria is looking at this platform for its fight against Boko Haram. At one time, the Air Force considered acquiring for itself a wing of LAS so as to be able to train and operate more closely with partner countries. For these reasons, but more significantly to reduce the costs of providing air support to U.S. and friendly forces in low-intensity conflicts, it would make sense for the Air Force to resurrect the idea of buying its own fleet of A-29s.

A similar argument could be made for acquiring a fleet of low-cost, long-endurance drones to complement the existing force of MQ-9 Reapers. The Reaper fleet is being run ragged by all the Combatant Commander’s demands for ISR. As I wrote back in March, the Air Force should consider acquiring a platform such as Aurora Flight Sciences’ Orion, an ultra-long endurance drone specifically designed to reduce O&S and personnel costs. The need for a low-cost ISR drone is only going to increase as the Air Force confronts the need to invest in stealthy unmanned platforms for the high-threat environment.

A high-low force mix made sense even during the Cold War. It is even more the right answer in a national security environment characterized by a broader spectrum of possible conflicts and tight defense budgets. The high-end portion of the force should be acquired for its performance. That is why it needs to consist of F-22s, F-35s and the B-21. But the low-end portion should be designed around the lowest cost approach to meeting mission requirements.

This story originally appeared in the Lexington Institute’s LexNext blog