Why America's B-2 Stealth Bomber Is Now 1,000-Times More Ready for War 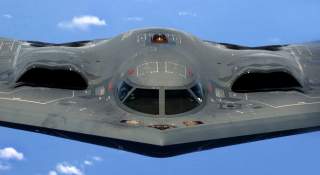 The new processor increases the performance of the avionics and on-board computer systems by about 1,000-times.

All 20 Air Force B-2 Spirit stealth bombers have been outfitted with a new flight management control processor designed to modernize the aircraft’s computer system, improve its weapons integration and enable it to rapidly embrace software upgrades, service officials said.

"The B-2 Flight Management Control Processor has been replaced with a modern Integrated Processor Unit.  This upgrade is a quantum improvement over the legacy system, providing over a thousand times the processor throughput, memory, and network speed,” Maj. Gen. Jon Norman, Director of Global Power Programs in the Office of the Assistant Secretary of the Air Force for Acquisition, told Scout Warrior in a written statement.

Although built in the 1980s, the B-2 is a digital airplane which uses what’s called a “glass cockpit” for flight controls and on-board systems.

The upgrade involves the re-hosting of the flight management control processors, the brains of the airplane, onto much more capable integrated processing units. This results in the laying-in of some new fiber optic cable as opposed to the mix bus cable being used right now – because the B-2’s computers from the 80s are getting maxed out and overloaded with data, Air Force officials told Scout Warrior.

Air Force plans, as Norman indicated, call for the B-2 bomber to be armed with a next generation digital nuclear weapon -- called the B-61 Mod 12 with a tail kit.

The B-61 Mod 12 is an ongoing modernization program which seeks to integrate the B-61 Mods 3, 4, 7 and 10 into a single variant with a guided tail kit. The B-61 Mod 12 is being engineered to rely on an inertial measurement unit for navigation, service officials explained.

The LRSO is especially designed for high-risk enemy targets where firing a long-range nuclear weapon might be needed to keep aircraft crews away from risk of successful enemy attack. The Air Force has released a solicitation to industry as part of the process to design, build and deploy the new weapon.

The B-2 can also carry a 30,000-pound conventional bomb known as the Massive Ordnance Penetrator, a weapon described as a more explosive version of the Air Force GBU-28 bunker buster.

Most of the Air Force B-2 bombers based at Whiteman AFB in Missouri. The B-2 can reach altitudes of 50,000 feet and carry 40,000 pounds of payload.

“Processing capacity is the force enabler for all future B-2 avionics upgrades, including upcoming integration of digital nuclear weapons, such as the B61-12," Norman added.