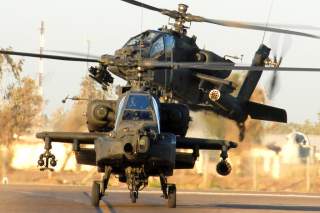 The U.S. Army will spend billions of dollars over the next decade to upgrade its iconic Apache helicopters to the latest—and most likely, last—variant, the AH-64E “Guardian.” Already battle-tested in Afghanistan, the Apache Guardian reflects the latest trends in U.S. military doctrine—namely improved response and loiter time, interoperability with drones, and the capability to engage maritime targets.

The Apache stands amongst a number of weapon systems such as the M1 Abrams tank and the F-15E Strike Eagle that entered service in the 1980s and proved their mettle in the 1991 Gulf War. Apaches fired the first shots of that conflict took out Iraqi low-band radars with Hellfire missiles, clearing the way for the initial strikes by F-117 stealth fighters. A total of 277 Apaches were deployed in the conflict, claiming the destruction of 278 Iraqi tanks as well as numerous so other targets—a high “rate of return” by the standards of most weapons systems. Only one Apache was lost in combat.

Attack helicopters are responsive and relatively precise means of unleashing heavy firepower where it’s needed most—but unlike main battle tanks or jet fighters, even an armored helicopter is vulnerable to low-tech machine guns, antiaircraft cannons and even rocket-propelled grenades, let alone surface-to-air missiles. In later conflicts in Afghanistan and Iraq, AH-64s continued to prove their deadly effectiveness, but couldn’t avoid losses from ground fire, including during an infamous raid against the Iraqi Medina Division that a strike group of thirty-one Apaches badly shot up by heavy machine guns and anti-aircraft cannons.

The “Guardian” Apache was approved in 2012, fifteen years after the preceding AH-64D “Longbow” upgrade, which mounted an APG-78 radar above the rotor that allowed the Apache to detect and fire at ground targets outside of the line of sight. However, this increased the Apache’s unloaded weight by 15 percent, to 11,800 pounds, without increasing the engine power to compensate.

The new AH-64E addresses this by installing a trifecta of new systems: more powerful T700-GE-701D turboshaft engines, a modern face gear transmission system, and new composite rotor blades—increasing the AH-64E’s speed from 140 to 180 miles per hour. The Guardian Apache can thus arrive on the battlefield faster and loiter overhead for longer—57 percent longer, according to one field commander. New hydraulic “shock strut” landing gear also improve the Guardian’s crash resistance.

Another upgrade is a Manned-Unmanned Team (MUM-T) drone controller datalink enabling the Guardian’s copilot to remotely control and receive data from an orbiting Army MQ-1C Grey Eagle drone. This allows the Apache crew to observe the battlefield before they’ve arrived—and even to hover behind cover, waiting for a target to be identified by drone so it can make a devastating pop-up attack. The Apache crew can even assume manual control of the drones to paint targets with a laser or launch the drone’s Hellfire missiles.

The latest Lot 6 batch of Guardians includes updated fire-control systems that can identify and target ships at sea, presumably to rain Hellfire missiles upon them. Clearly, this is aimed at making the Apache more relevant to any possible conflict in the Pacific—as well as possible skirmishes in the Persian Gulf. Although plans to make a naval version of the Apache died off long ago, U.S. Army Apache units have been practicing deploying on ships at sea anyway. British Apaches have already operated successfully from the HMS Ocean amphibious assault ship during the 2011 intervention in Libya.

In addition to upgrades to computer processors and software, there are also a number of useful new gizmos. A new Ground-Fire Acquisition System, installed on the tip of the wing stub, scans the battlefield with cameras for muzzle flashes from small arms, cannons and rocket-propelled grenades, and automatically slews the Apache around to deliver return fire with its thirty-millimeter cannon. Link-16 datalinks in later Guardian production lots will allow improved data sharing and networking with friendly forces. The computer software has also been upgraded with a Cognitive Decision Aiding System intended to ease the workload posed by routine piloting tasks.

The Apache Guardians first saw action in 2015 when the First Battalion of the 229th Aviation Regiment deployed to southern Afghanistan for seven months. They reported an 87 percent readiness rate—above the expected 80 percent average. The unit’s commander noted that the Guardian’s ability to arrive on the battlefield faster and loiter longer disrupted Taliban tactics, pinning them down for longer periods while the Guardian orbited overhead. The Apaches networked with friendly drones on 60 percent of their sorties—not just with Grey Eagles, but also smaller RQ-7 Shadows and Air Force Reaper and Predator drones. This enabled the Apaches to identify and destroy targets faster, and thus achieve more with each sortie. However, training and doctrine on how to use the drones has yet to be solidified, and the Guardian’s datalinks aren’t fully functional yet with drone models other than the Grey Eagle.

Apaches also were deployed to Iraq in 2014 to provide air support to American troops in country, and several are reportedly launching strikes against ISIS in the siege of Mosul.

The Apache is expected to remain in service until 2040. The latest contract, awarded in April, is to upgrade 117 Apaches for $922 million by 2018. Ultimately, 634 Apaches will be upgraded to Guardians, and once those are done, fifty-six brand-new AH-64Es will be produced. Many of the Apaches will serve in new active-duty Attack-Reconnaissance battalions, composed of Apaches taken away from the National Guard units to replace the retired OH-58 scout helicopter.

Fifty of the new Guardians will also enter service with the British Army, and another fifty of its Apache Longbows will be upgraded. Other countries slated to receive AH-64Es include India (twenty-two), Indonesia (eight), South Korea (thirty-six), Saudi Arabia and Taiwan.

Will there be future upgrades to the Apache after the Guardian? Boeing definitely thought so, and sketched up a proposed AH-64F with a variety of flight-performance enhancements, including more powerful engines, new stub wings to provide better lift while cruising and an articulating tail rotor.

However, the Army has recently indicated it is not interested in pursuing another major Apache upgrade—because it needs the funding to introduce its next generation Future Vertical Lift chopper, by 2030. New armaments, however, are possible: Boeing has suggested laser-armed Apaches for destroying drones, while an AH-64 recently test fired the Brimstone antitank missile.

The Guardian may be the last of the Apaches—but it looks likely to see a lot more action in the decades to come.