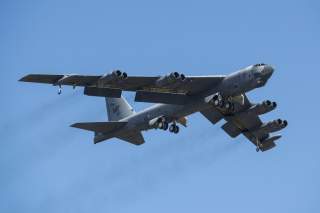 We’ve already examined the colorful analysis offered by Philippine president Rodrigo Duterte regarding his country’s new jet fighter, so let’s today look at the aviation insights offered by a politician on our home shores.

“But Russia has been expanding their -- they have a much newer capability than we do. We have not been updating from the new standpoint.

I looked the other night. I was seeing B-52s, they're old enough that your father, your grandfather could be flying them. We are not -- we are not keeping up with other countries.”

The gist of it appears to be the B-52 is an obsolete airplane that proves that the United States Air Force has fallen behind the rest of the world, particularly Russia.

But Those Aircraft are Really Old, Aren’t They?

You can call off the fact checkers on this one! The B-52 Stratofortress first flew in 1952 and ended its production run in 1962, so the 76 B-52Hs in Air Force service are older than nearly anyone flying them. Trump is literally accurate in stating that “your grandfather” may have flown the plane, in that there is at least one family with three generations of B-52 crew members.

Such a storied plane is worthy of its own profile—how many planes can claim their own hairstyle, 1970s rock band, and cocktail?—but we’ll stick to the questions of its current relevance for now.

The B-52—nicknamed the BUFF—was originally intended to drop nuclear gravity bombs on the Soviet Union. That would already have been suicidal by the end of the 1960s given the rapid improvement of surface-to-air and air-to-air missiles, and would be even more so today.

So What Are They Good for? Why is the U.S. Air Force Still Flying Them?

The B-52 has been deployed in virtually every major military conflict the United States has engaged in since the Gulf War. Why?

The B-52 still has two things going for it: it can carry a lot of bombs and missiles. And it can carry them very far—8,800 miles, before even factoring in in-flight refueling. Which you should. The airframe also has a lot of space for upgrades.

So basically, it’s a long-distance bomb and missile truck.

What if the target has air defenses? Then each B-52 can lug up to 20 AGM-86 Air Launched Cruise Missiles (which can carry both nuclear and conventional warheads) across oceans and launch them from hundreds of miles away.

If you need to surge a ton of firepower somewhere halfway across the world from the nearest air base, the capability is there.

But B-52s often haven’t had to use expensive cruise missile—because most of America’s recent opponents, such as the Taliban in Afghanistan or ISIS in Middle East, don’t have the powerful surface-to-air missiles necessary to shoot at a B-52 flying at high altitude.

B-52s loaded with twelve JDAM GPS-guided bombs or 4 to 10 GBU laser-guided bombs can orbit over battle zones, awaiting close air support requests from troops on the ground. Of course a jet fighter can do the same job—but fighters have shorter range, and can’t loiter overhead for nearly as long. When the United States intervened against the Taliban in Afghanistan in 2001, it was B-52s and more modern B-1s flying from the United States lugging precision guided bombs that dropped much of the initial ordinance because the U.S. Air Force did not yet have local airbases from which its fighters could operate from.

Today, B-52s are actively flying missions against ISIS and the Taliban.

I Heard They’d be a Great Way to Carpet Bomb ISIS!

Carpet bombing involves dropping hundreds or thousands of unguided bombs to ‘carpet’ the target area. It’s an indiscriminate technique which does have a nasty shock effect. The B-52 is certainly capable of it—it can carry 51 conventional 500- or 750-pound bombs, or around 40 cluster bombs. B-52s did perform low-level carpet bombing attacks against Iraqi troops stuck in exposed defensive positions in the middle of the desert during the 1991 Gulf War.

However, the Air Force is uninterested in carpet bombing today. It only works against densely concentrated targets, which is certainly is not typical of the opponents it fights today. It also produces tons of collateral damage and couldn’t be employed near civilian areas without causing heavy civilian casualties for minimal military benefit. Carpet bombing during World War II—even on the occasions it was militarily effective—produced disproportionately civilian, and at times even friendly, casualties. Blowing up an ISIS held city would clearly be a war crime—and if that isn’t enough to dissuade, then the obvious political and military consequences should be.

So What Else are the BUFFs Good For?

Being able to fly over great distances for hours is very handy for patrolling—and interdicting—large bodies of water. Think of the vastness of South China Sea, the control of which is contested by China.

B-52s may not have the same sensors as the dedicated maritime patrol planes operated by the Navy, but some have been equipped with Litening and powerful Dragon’s Eye surface-search radar pods which can detect and identify vessels. Some have also been modified to carry eight AGM-184 Harpoon anti-shipping missiles—the latest version of which has a range of over 160 miles. So B-52s could play a useful role in a maritime conflict.

Now that we’re back to talking about the B-52 as a sort of missile truck, there is even talk of using them as flying arsenal planes—possibly even to carry anti-aircraft missiles.

Insanity you say! Hear this one out. U.S. fighters are limited in the numbers of air-to-air missiles they can carry, particularly stealth fighters. This could be a problem if faced by a numerically superior force. So instead, stealth fighters could ‘ride point’ and use their hard-to-detect Active Electronically Scanned Array radars to spot approaching enemy aircraft, and then use datalinks and networking to relay that data to another platform such as a ship—or an ‘arsenal plane’ such as a B-52 or B-1 loaded with dozens of very-long range air-to-air missiles.

For now it’s just a theory—and one with its limitations, particularly if the other side has stealth fighters. But it’s one the Pentagon is actively considering.

Enough with missiles, let’s talk about one last application of the B-52: it’s serves as a highly visible means to make a show of force. Aircraft remain one of the more vulnerable ways to deploy a nuclear weapon when compared to ballistic missiles launched from submerged submarines or silos deep underground in the United States. But the latter two systems are hard to show off, whereas you can deploy a B-52 closer to a crisis zone, and have it perform overflights to send a clear threatening message.

Silly diplomatic posturing of no military value, you say? In fact, a report recommends that the Air Force retain its nuclear weapon capabilities primarily on the basis that it is a stronger means of communicating a threat posture when compared to other methods in the nuclear triad. Nobody actually wants to use nukes—the hope is that they will dissuade opposing countries from aggressive courses of action.

So, you can occasionally sees reports of B-52s conducting overflights of airspace claimed by China over the South China Sea or a fly-by of North Korea after a nuclear test. Just like the incidents where Russian Tu-95 Bear bombers buzz by the coast of England or California, the B-52’s indiscreet character actually better serves the political purpose of the fly-bys.

Doesn’t the metal in the airframes wear down? What about the ancient avionics and engines?

This is a consideration. But don’t worry—the Air Force is confident its B-52s will remain airworthy through 2040 and possibly longer. This is thanks to the B-52’s robust and conservative design, which allowed more tolerance for stress than later, higher-performing aircraft. Also, it’s because the Air Force has invested billions of dollars in keeping the B-52 airworthy and up to date.

Nonetheless, the avionics are old. A New York Times article described the old hydraulics and wiring, and glitchy, outdated computer systems that still remain in the B-52 despite various upgrades and add-ons.

But the Air Force is spending $1.1 billion upgrading the BUFFs with its CONECT avionics upgrade including modernized displays, communication systems, and datalinks for networking with friendly forces. It will also soon install the new Internal Weapons Bay Upgrade, which will allow it to carry additional guided weapons in its bomb bay. The bay would carry 8 additional JDAM-type weapons, or even allow the B-52 to deploy Miniature Air Launched Decoy (MALD) missiles which can confuse enemy air defenses and even deploy radar jamming systems.

The B-52’s old TF-33 turbofan engines are also inefficient—as in, 3,000 gallons an hour inefficient. The Air Force would like to replace them with something less costly to maintain and operate, but can’t find the money—so they’re floating a proposal to have a private company do the repairs on credit: once the new engines were replaced, the government would use the money saved in fuel economy to pay back for the upgrade. Certainly an example in creative financing!