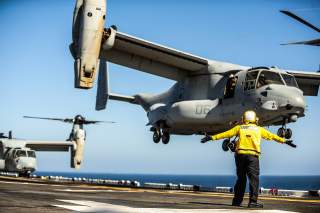 The Corps is also developing technology to better network Osprey aircraft through an effort called “Digital Interoperability,” or DI. This networks Osprey crews such that Marines riding in the back can have access to relevant tactical and strategic information while in route to a destination.  DI is now being utilized by the 15th Marine Expeditionary Unit and is slated to be operational by 2017.