Why America's next Fighter Ace Won't Be a Drone 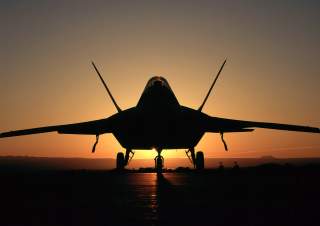 For a development that could revolutionize air combat, the announcement was surprisingly humdrum.

In the bureaucratic language of federal contracts, the U.S. Air Force simply said that the MQ-9 Reaper drone would be getting air-to-air missiles. Or more specifically, Reaper manufacturer General Atomics would be awarded a sole-source contract that "requires development of a MQ-9 Reaper Air-to-Air Missile AVSIM capability."

AVSIM stands for aviation simulation. And presumably the only reason that the Air Force wants to simulate a drone armed with air-to-air missiles is because it actually intends to arm real drones with them.

Just how important is this? Think back to 1914, when the first airplanes were used for reconnaissance (just like today's drones began). Then a few enterprising pilots started using airplanes to drop bombs (sound familiar?), and then someone had the bright idea of installing a machine gun and attacking other aircraft. The rest is history.

Current unmanned aircraft (UAV), like the MQ-9 Reaper and its smaller cousin the MQ-1 Reaper, function as spy planes and ground attack aircraft. But in fact, U.S. Air Force drones are not exactly strangers to air-to-air combat. In the early 2000s, the Air Force experimented with arming Predators with an air-to-air version of the Stinger surface-to-air missile. In 2002, a Predator actually launched a Stinger at an Iraqi MiG-25 that was attacking it.

On Dec. 23, 2002—less than three months before Operation Iraqi Freedom began—a Stinger-armed Predator was performing reconnaissance over a no-fly zone when an Iraqi MiG-25 turned in to attack. The Predator fired at the MiG-25, and the TV imagery showed the smoke trails of the two missiles crossing in midair. Unfortunately, the MiG’s missile downed the Predator, but the Iraqi Air Force apparently drew the conclusion the US would have wanted them to: that there was no future in combating Stinger-armed Predators. There were no further attacks against the UAVs.

Note the part about "no further attacks." Air Force Lt. Gen. David Deptula (ret.) believes that's one reason that drones will be armed with air-to-air weapons. "Just as a deterrent measure," he told the National Interest. "If I'm Country X, and I want to shoot down an MQ-9 that has no defensive means, I just taxi up to it and shoot it down. But if I pull up behind it and a missile gets launched at me, word is going to get around real quick."

Yet the holy grail of air combat drones isn't self-defense. It is robot planes, unburdened by the weight and physical limitations of a fragile human in the cockpit, running rings around fleshbag-flown manned aircraft. Or, maybe swarms of drones darkening the skies with salvos of air-to-air missiles.

Indeed, DARPA's "flying missile rail" would be a launcher/AIM-20 missile combo carried under the wing of a fighter: the launcher would detach from the fighter and loiter over a battlefield, waiting to take out hostile aircraft. Meanwhile, a Russian company is developing a large drone, based on a manned trainer aircraft, that can carry air-to-air missiles.

It's all a vision worthy of Terminator movies. But how realistic is this robotic dystopia? One problem with drones like the Reaper is latency, or the slight delay in connectivity between drone and ground control station caused by bouncing signals off communications satellites. For a drone just orbiting a terrorist hideout and taking pictures, that's not such a big deal. But in air combat with supersonic fighters, where split seconds count, a moment's lag time could be fatal.

Deptula thinks current technology is far from being able to provide the sort of situational awareness that drone ground controllers would need for air combat—that might involve dozens of aircraft and missiles spread over hundreds of miles. Kevin Gambold, who formerly flew Royal Air Force Tornado fighters and Predator drones, believes that UAVs will have be designed and equipped for the stresses of air combat. "The current lack of an air-to-air targeting radar makes the classic air defense model difficult, and the current suite of UAS are not fit for basic fighter maneuvers," Gambold says.

But all these problem are technological, and therefore have the potential to be solved. The real issue is political, and even ethical. Right now, the U.S. government goes out its way to reassure everyone that humans always make the final decision before a drone uses its weapons. But to fully exploit their advantages in air combat, unmanned aircraft would need to be autonomous, including the ability to instantly launch weapons on their own volition.

Think about that: a machine would have the authority to decide life and death. And not just any machine. While a land mine also explodes without a human pulling a trigger, we are speaking of a heavily armed aircraft that could be the size of an airliner.

"There is nobody in the United States that is going to employ autonomous vehicles that fire weapons without a human in the loop," Deptula emphasizes.

That may be so. Still, the imperatives of warfare, and the natural desire to have the most lethal arms (how else do you explain nuclear weapons?) suggests that autonomous killing machines may yet have their day.