Why America’s Next Tank Might Not Even Be a ‘Tank’ 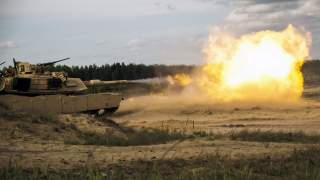 The idea of armored fighting vehicles dates from before da Vinci and is the latest iteration of the mounted heavy Cavalry and war elephants. The advent of the internal combustion engine made possible vast increases in energy, which in turn, made practical vehicles with more protection and offensive armament.

Balancing off tradeoffs between firepower, mobility, and protection within the confines of a mass limitation of roughly 70 tonnes (the amount most roads and bridges can carry); a form factor that can be readily transported by rail, road, and ship; that adequately protect the occupants is the task of an AFV designer.

Deriving from these basic limitations are definition of purpose and mission, which in turn, dictate the execution of particular architectures. World War I’s primary problem was the stalemate of trench warfare. From that need, a mission for a heavy tank is to crush barbed wire obstacles and cross trenches, and either defeat infantry with machine gun fire, or fortifications with light cannons. British Mark I-IXs, German Mk IVs, are example of this design.

Armored cars, meanwhile, evolved into light tanks that is typified by the Renault FT’s revolutionary design with a rotating turret for the main armament, engine compartment in rear and driver forward. Renault FT became the dominant design for all light and heavy tanks to this day.

Alternative architectures, like the assault gun, was an expediency that evolved to become mobile artillery with little protection. Lighter AFVs like Bradley M2/3 took over the task of reconnaissance formerly done by light tanks and tankettes. Infantry carriers like the M1126 Stryker variant provided protection and transported infantry.

A major divide between network nodes will be between manned vs. unmanned platforms. Unmanned nodes have the advantage of performance not limited by support for a crew. A firepower node can be a stationary device with little mobility or protection (i.e. a remotely triggered mine). An unmanned sensor node (UAV) is optimized for mobility but may have no protection or firepower.

Manned nodes will always be limited by and prioritize the sustainment and protection of the fragile human body of the crew. It must emphasize protection first, then mobility, and also have some “last ditch” means of protection that functions like a bayonet.

A future manned node is more than likely to never operate without a phalanx of unmanned or supporting platforms (e.g. from drones for sensors, mine / booby trap hunters, long range / reach weapons like missiles, or traditional “air cover” or traditional infantry support). This, in turn, put a high priority on resilient, secure, and redundant communications with the network that is a new essential requirement added to the traditional equation of firepower, mobility and protection.

The mission of a manned node is likely to not be a front line sensor (i.e. scout), or a primary means of offense or defense firepower (which can be distributed onto other nearby platforms), but is a primary command and control node that directs resources from the network and make use of the unique capabilities of a crew (i.e. liaison and organize aid to civilians or aid casualties).

Applying these principles reveal that the heavy main battle tank is an anachronism. All but the tanks with the latest armor and active protection systems are vulnerable to state-of-the-art anti-tank, particularly top attack missiles. Massive mines have likewise, destroyed, or at least mission-killed state-of-the-art main battle tanks. The day when one lugs around a 120mm cannon in a 70 tonne armored box is nearly over, like the days of armored mounted knights when gunfire readily penetrated the heaviest metal armor that can be worn.Dispensing with the heavy cannon, munitions and turret alone removes about 20 tonnes from a modern MBT, and as the other components are made lighter, a ripple effect can cut weight of a very well protected vehicle from 70 to about 40 tonnes. That is still twice the weight of a Stryker. The lighter weight can be used to improve survivability and mobility with state of the art countermeasures.

The maturation of directed energy weapons will require that manned nodes have significant exportable power and energy storage, which are not present requirements. On board defenses against heavy armor or air attack will likely require some type multipurpose missile that presently do not exist that can handle anti-armor, personnel, airborne and other threats in one package. Only a small number will likely be carried to reduce hazards as the node will rely on other systems.

Emphasis on protection of crew is essential because light formations are ill equipped to survive in the high intensity warfare environment that has appeared in battlefields like the Ukraine. The ideal manned node of the future will combine and improve on the survivability of the best current generation main battle tanks, but with the mobility of a Stryker, and more usable interior room. Light armor is not survivable in these environments.

A key design feature will be modular field upgradeable hardware that enable new features and functions to be rapidly added or deleted at will as required by mission. Modules from powerpacks, communications, protection, sensors, electronic warfare, etc. to specific mission support equipment need to be rapidly swappable, reconfigurable and updateable as opposed to traditional “swiss knife” designs. Self driving vehicle technology’s maturation, fully or semi-automated defenses will make it possible for such a vehicle can be optionally manned, making for smaller crews.

The armored manned command node vehicle is not known to be on any major military’s drawing board. Ideally, such a program need to be part of an overall navy, air, and army program to transition to autonomous unmanned platforms. It is a fundamentally different architecture that obsoletes the main battle tank and armored cavalry vehicles in inventory.

The defense buildup planned for 2020 may be the ideal time to put forward a new architecture and transition to a new, tightly integrated capabilities across and within services.

Danny Lam is a Senior Contributor to Warrior Maven.