Why are Russia and Turkey Holding Joint Naval Exercises in the Black Sea? 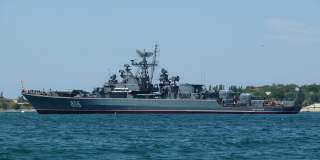 Russia and Turkey have held a series of joint naval exercises in the Black Sea. The Kremlin’s Black Sea Fleet deployed three ships while the Turks sent two vessels to the exercise, which is called PASSEX.

The Russian side deployed the brand new frigate Admiral Grigorovich—armed long-range Kalibr land-attack cruise missiles—the minesweeper Vice Admiral Zakharin and the patrol vessel Raptor for the exercise, according to the Russian defense ministry. Meanwhile the frigate Barbaros and the corvette Buyukada made up Ankara’s contribution to the wargames.

“During the exercise, trainees covered unmooring and egress from basing points, piloting behind mine-clearing attachments, and joint maneuvering and organization of communication, as well as repelling attacks from small high-speed targets, inspection operations, and maritime search and rescue,” a Russian Ministry of Defense statement reads.

The joint exercises between Russia and Turkey could have wider implications for the NATO alliance and the West—especially as Ankara gears up for a constitutional referendum on April 16. The new constitution would grant Turkish president Recep Erdoğan far greater powers than he currently wields—which has been a cause of concern in the West. Indeed, in some way, the joint exercises might be an indication that Turkey is shifting away from its Western orientation.

Faced with criticism from European allies and the United States, Turkey has in recent months drawn closer to Moscow. Erdoğan—who fashions himself as strongman—has found a kindred spirit in Russian president Vladimir Putin and past grievances, such as Turkey’s downing of a Russian Su-24 Fencer strike fighter in November 2015 have largely been forgiven. However, given how closely Turkey is intertwined with the West, it is unlikely the Ankara will pull away from Europe in the near term.

Indeed, Ankara’s budding relationship with the Kremlin might ultimately be a ploy. “It is a means to pressure the Alliance and show Turkey has geopolitical options,” Russian military affairs analyst Michael Kofman at the Center for Naval Analyses told The National Interest. “In reality it is capricious, earning Turkey enmity from Europeans. That, too, is a political relations disaster.”

For the NATO alliance, the Turkish exercises with Russia poses a problem. “We should ask how NATO intends to maintain common approach to Black Sea if the only country that really has a navy there is exercising with Russia,” Kofman said.

From the Russian perspective, the exercise affords the Kremlin the ability to demonstrate to Washington and Europe that it is not isolated from NATO let alone the world. “For Moscow, it is a chance to show Western governments and the world that NATO can’t even keep its own members from cooperating with the Russian military,” Paul Saunders, executive director for the Center for the National Interest—the think tank that publishes The National Interest—said.

Thus, as it was during the Cold War, NATO’s southern flank remains a problem for the alliance.