Why ASEAN Can't Stand Up to China 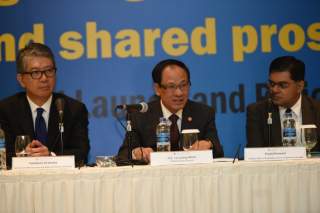 China’s negotiations with ASEAN on a Code of Conduct for the South China Sea are dragging into their thirteenth year. At the same time, China has undertaken a massive land reclamation campaign to change the status quo in the South China Sea, leaving critics to lament ASEAN’s inability to form a united policy toward China.

Ambiguity about China’s rise is a “black sheep” in the integration of Southeast Asia. Although ASEAN plans to achieve the economic pillar of building a regional community by the end of 2015, integration on the political-security pillar has been slow, partly due to the ASEAN principles of non-interference and non-confrontational bargaining that slow consensus building. ASEAN’s continuation of the same policies towards China since the 1990s has been unsuccessful in keeping China from pushing the region toward instability and threatening ASEAN’s integration. For example, when China forced a confrontation with the Philippines over the Second Thomas Shoal only nine days before a round of Code of Conduct consultations in 2014, China showed it had little regard for ASEAN’s goal of a cooperative regional order.

While ASEAN lacks consensus on many political and security issues (China chief among them), ASEAN’s growing centrality in the Asia-Pacific demonstrates its continuing value for regional integration and institutionalization of dialogue. Through ASEAN, relatively weak states, like Laos and Cambodia, have aggregated power in the international system. Also, as champions of ASEAN highlight, the organization can help produce a stable regional order in a contentious part of the world, such as when it united behind the nonaligned movement during the Cold War.

Nonetheless, China has exploited divisions among ASEAN members and applied economic pressure, both positive and negative, to keep countries from coming to a consensus on maritime security in their own backyard. Moreover, weak leadership on political and security issues has left ASEAN without a united approach on China’s aggression in the South China Sea. This is a major reason why ASEAN remains divided on China—there is no leading nation to overcome economic, political, and cultural differences and forge an overarching consensus.

Leadership in ASEAN after the 1997 Asian Financial Crisis has been absent or very weak. ASEAN lacks a leader like the EU has in Germany.  Singapore and Thailand have provided limited leadership on economic issues, but Thailand’s ability to perform this role has weakened due to its internal troubles. The absence of a core leader, especially without strong internal mechanisms to mitigate differences among members, has been particularly problematic for security issues.

ASEAN’s lack of strong leadership has contributed to an environment in which many members have pursued different bilateral actions and policies towards China that are at odds with an ASEAN-centric approach to regional issues. A divided ASEAN has found its recent strategic environment shaped more by external interests than its own.

Without a leadership initiative on the part of one of ASEAN’s more neutral states, it is doubtful that ASEAN policy toward China will change dramatically. But does any ASEAN member have the potential to lead the organization, and by extension, create a consensus on China? A regional leader needs capacity (financial and human resources), internal commitment to undertaking a leadership role, and the buy-in of its regional and international neighbors. Jakarta remains the symbolic head, hosting the ASEAN secretariat, but Indonesia currently lacks the will to take a definitive leadership role.

ASEAN’s future is tied to China’s rise. With a range of political, economic, and military differences among ASEAN members, the organization needs a strong voice among member states to guide internal and external consultations, if its members hope to produce on ASEAN-centric approach to security issues. Without a committed and capable leader(s) on political-security issues, periodic eruptions of crises in the South China Sea could turn the status quo balance of power into chronic instability.

Amanda Conklin is currently working on Asian policy issues in the field of international affairs. She was Fulbright in Macau from 2012-2013. The views presented above are her own and do not reflect that of her employer.

Image: Flickr/ILO in Asia and the Pacific