Why Asia Is Trembling Over a U.S.-China South China Sea Showdown 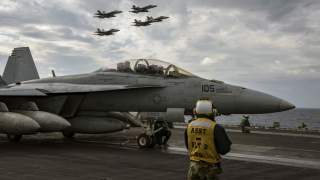 As U.S.-China rivalry in the South China Sea is ringing alarm bells in littoral Southeast Asian nations, with fears rising that Donald Trump’s administration could tilt the region’s delicate balance towards conflict.

Trump’s administration has indicated it views China’s actions as a direct challenge to freedom of navigation and overflight in one of the world’s most important sea lines of trade and communications, and a challenge to American strategic primacy in the Western Pacific.

The South China Sea disputes and Trump’s Asia policy were at the center of the recently concluded Association of Southeast Asian Nations foreign ministers’ meeting in the Philippine resort island of Boracay. Ministers expressed unanimous grave concern over the “unsettling” militarization of features in the sea, but fell short of blaming China.

With the Philippines taking over the rotating Asean chairmanship there are expectations of a diplomatic breakthrough. At the least, there is new hope that after more than a decade of negotiations Asean and China can finalize a legally binding Code of Conduct in the maritime area.

Manila is also quietly pushing to mention its landmark international arbitration case win in accordance with the United Nations Convention on the Law of the Sea against Beijing over their territorial disputes in the South China Sea, according to sources familiar with the situation. China has consistently rejected the legitimacy of the ruling.

Under the chairmanship of Laos, a close China ally, Asean failed to mention the arbitration award by The Hague-based tribunal, which by some readings nullified the bulk of China’s sweeping territorial claims in the area. This year, however, a number of Asean countries seem interested in reviving The Hague ruling as a basis to manage the maritime spats.

(Asean members Brunei, Malaysia, the Philippines and Vietnam all have competing claims with China in the South China Sea.)

“A number of ministers expressed concern over recent developments and escalation of activity in the [South China Sea], which may further raise tensions and erode trust and confidence in the region,” said Philippine Foreign Secretary Perfecto Yasay after the February 21 conclusion of the meeting. While he cast doubt the disputes would be solved “during our lifetime,” he was optimistic Asean and China would complete a code of conduct framework by the middle of this year.

Though Duterte has publicly backed engagement with China, largely out of fear of direct conflict with the Asian juggernaut, Philippine defense officials are known to be deeply concerned with China’s ambitions in Philippine-claimed waters. While the Philippines and Vietnam have quietly welcomed Trump’s more robust American pushback in the South China Sea, there are wider regional concerns about how a US-China conflict at sea would impact on smaller regional states.

Asean has long sought to prevent a great power conflict which would force its members to choose sides between China and the US. For most Asean members it is crucial to continue expanding trade and investment ties to China, on one hand, while maintaining robust military cooperation with America as a hedging strategy on the other.

In the event of a Sino-America conflict, this balancing strategy would be severely tested, particularly among countries with competing claims in the maritime area. Any military escalation in the sea lanes would also undermine trade and investment links and severely impact on the  region’s trade-geared economies.

There are rising expectations that Trump will adopt a “status quo plus” approach to his predecessor Barack Obama’s “pivot” towards Asia. Unlike the Obama administration, which proactively engaged smaller Asian states, the Trump administration has so far left Asean in the cold, preferring to prioritize instead engagement with Northeast Asian allies Japan and South Korea.

As the supposed driver of regional integration and bedrock of East Asia’s security architecture, Asean is now scrambling to assert any semblance of centrality in managing the South China Sea disputes. Indeed, there is a lingering sense that Asean could slip into strategic irrelevance unless it quickly forges a unified and coherent approach to the maritime disputes.

As China intensified its influence over Southeast Asian countries, including American treaty allies Thailand and the Philippines, the Trump administration confronts the tough task of regaining strategic ground lost in the late phases of Obama’s lame duck rule. But it is still unclear the comprehensive engagement that will be needed to reverse the tide under Trump.

In coming months, the US Navy is expected to conduct sustained freedom of navigation operations to reassert its power via-a-vis China’s claims in the South China Sea. Trump will also likely put more pressure on regional allies, particularly Japan and Australia, to contribute more to multilateral efforts aimed at reining in Chinese growing maritime ambitions.

The incident sent ripples through Southeast Asia and showed that the Trump administration’s tough language has not yet prompted China to retreat from its foothold in adjacent waters. China has recently fortified its presence in both the Spratlys, where it occupies seven land features, and the Paracels, where it occupies all of the 20 land features situated near Vietnam.

Weeks before Trump’s inauguration, China deployed anti-aircraft guns and close-in weapons systems to the Hughes and Gaven reefs of the Spratlys. It also recently built towers equipped with targeting radars at the Fiery Cross, the command-control center of China’s administrative presence in the island chain.

In the Paracels, also claimed by Vietnam, China has expanded the Woody Island to incorporate the nearby Rocky island. The integrated artificial island now hosts an airstrip, hangers and HQ-9 surface-to-air missile batteries, according to reports. Five other land features are set to have harbors and helipads, with the Duncan Island expected to host a full-fledged helicopter base.

Washington’s deployment of the USS Carl Vinson, accompanied by an armada of warships, was a clear signal that neither will America sit by idly as the strategic balance shifts. The last time America showed such force in the South China Sea was in early 2016, when there were concerns of imminent Chinese reclamation activity on the Philippine-claimed Scarborough Shoal.

That was under the pro-US Philippine President Benigno Aquino administration, which was replaced last July by the at least outwardly more China-friendly Duterte. China’s growing military prowess its putting pressure on America to develop a stronger naval presence in the region, with power projection capabilities at nearby bases, particularly at Subic and Oyster Bay in the Philippines.

But without stronger engagement and clearer messaging under Trump, it is not clear those or other regional facilities will be available when America most needs them.