Why Is Australia Building Such Big Submarines? 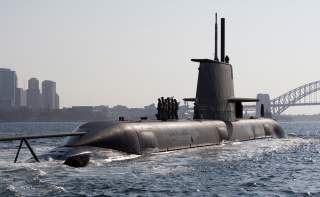 Everyone agrees that we here in Australia should, whenever possible, buy military equipment based closely on existing designs rather than new ones. Doing so results in lower costs, lower risks and quicker delivery. So why aren’t we going for a boat closer to an existing design for the Future Submarine? The key answer is the size of the boat we’re after; no one has an ‘off the shelf’ design for a conventional boat the size we want.

But why do we want such a big boat? There are many views on this. I’ve previously suggested that the key drivers are roles and range: we want our subs to carry a lot of different systems to perform many different roles, and to operate a long way from base.

Some other factors may have come into play as well. The decision early in the process to mandate the US AS/BYG-1 combat management system might well have committed us to a big boat because that system reportedly needs more space and power than existing conventional designs could provide, except for the Collins. And there remains a suggestion that some decision-makers have been influenced by the desire to create a path to a nuclear-powered submarine in the not-too-distant future, which would certainly help explain a preference for a bigger boat.

That all shows that the real reasons the Government has chosen to buy such a big boat remain a mystery, like so much else about the project—the status of AIP, the apparent decision against Li-ion batteries, the choice of pump jet propulsion, the alleged acoustic failings of the German contender and the total absence of any competitive discipline in the process from now on.

If the choice has been driven by the combat system or the dream of a nuclear future, then it’s plainly a huge mistake. Neither of those offers sufficient reason to accept the costs, risks and delays inherent in the current plan. Nor, as I have argued, does the desire for a submarine optimized for operations beyond the core role of anti-ship warfare.

The only good reason to go for a big boat is mission range and endurance. That really is important. Submarines—especially conventionally-powered ones—are most effective when they operate closest to the home ports of a potential adversary or in key chokepoints. For Australian subs operating from HMAS Stirling those are a long way away. (Exactly which ports and chokepoints we’re talking about is a big question, but for another time.)

For a diesel-electric submarine, mission range and endurance depends above all on fuel load. The ratio of fuel carried to fuel consumed improves as a boat gets bigger, so bigger boats have longer range and endurance. So it seems obvious that we can’t buy a boat off the shelf, because no MOTS boat is big enough to offer the range and endurance that our unique circumstances require.

What matters to Australia is the capability of the fleet. As far as range and endurance are concerned, we should be aiming for the fleet of submarines that offers the largest number of days on station in key operational areas per dollar spent. And that depends not just on how long each boat can stay at sea, but on how much it costs.

Of course we’d need more boats to achieve the same number of days on station, so operational costs would be higher, as would demands for crews. And moving boats in and out of the operational area more often would impose some tactical costs as crews have to familiarize themselves with the specific environment. But a big cost advantage could still lie with a bigger fleet of smaller boats—and it would be a more robust capability in the face of operational losses.

So how closely do the real numbers reflect the hypothetical ones in my example? I don’t know. The sums are more complex than my example suggests, because of possible differences in transit speed, for example. And credible information on the range and endurance of submarines is hard to come by, as is reliable information on costs.

But it’s quite possible that spending $50 billion on a bigger fleet of smaller, cheaper boats would give us more submarines on station, more reliably, and with far lower project and schedule risk than the smaller fleet of more costly and risky big boats that we’re aiming for now.

If advocates of big boats think that isn’t the case, it would be useful to see the numbers on which their conclusions rest. And this question can’t simply be dismissed, as some try to do, by saying that smaller boats simply can’t operate at all at such ranges. The 3,400 ton Collins class boats operate quite successfully a long way from home.