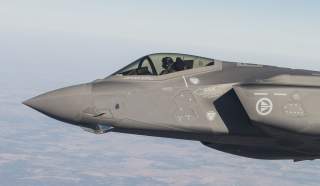 It’s ironic that a fighter named the Lightning II can’t fly in lightning. Among the most notorious of the F-35’s woes was a prohibition against flying in stormy weather for fear that lightning would ignite the aircraft’s fuel system.

The U.S. Air Force said in 2015 that the lightning problem was fixed. But it erupted again last weekend in Australia, which refused to allow its F-35s to fly during thunderstorms.

Two Australian F-35s, which had just performed during an air show near Melbourne, were scheduled on March 5 to fly northeast to Royal Australian Air Force Base Amberley, near Brisbane. Departure was postponed until the next day because of lightning conditions near Amberley.

Newer F-35s have lightning protection, but the two Australian aircraft—the first of seventy-two that the country has ordered—are early production models that haven’t yet been retrofitted.

“It is well documented that the F-35A aircraft requires modifications for lightning protection and these modifications have not yet been completed on the two visiting Australian aircraft,” said an RAAF press release. “As safety is Air Force’s priority, the aircraft will not fly in conditions where lightning is present.”

The two aircraft are Australian, but for now they are part of an international pool of F-35s stationed at Luke Air Force Base, Arizona, where Australian and other pilots are training. “Prior to return to Australia, the Australian F-35A will be modified with lightning protection,” the RAAF said. The modifications are scheduled to take place over the next year.

Mike Rein, Lockheed Martin’s F-35 communications director, was at the air show. He says that bad weather precluded all aircraft—not just the F-35—from flying to Amberley that day. “No jet wants to fly in lightning. So the airfield up there was closed.”

Unfortunately for the F-35, the story was picked up by Australian media and, not surprisingly, by Russian media as well.

“The F-35 gets the notoriety because it’s the F-35, but there were no F-18s or any other planes flying into that airfield that day,” Rein says.

Rein emphasized that the F-35 is certified for flying in lightning conditions, with all jets now coming off the production lines fitted with appropriate safeguards: “Early on in the program, because there are things that need to be done that are ranked higher than lightning certification, there were planes that came off the assembly line that have to go back for lightning modification. But even if those two planes had had that protection, that runway was still closed.”

Nonetheless, this isn’t good news for the F-35, which has drawn the ire of Donald Trump. After criticizing the aircraft’s cost and hinting that rival Boeing might be asked to produce an alternative, Trump controversially claimed credit for Lockheed Martin knocking down the F-35’s price tag. The lightning incident may also energize Australian critics of the program.

Michael Peck is a defense and historical writer based in Oregon. His work has appeared in Foreign Policy, WarIsBoring and many other fine publications. He can be found on Twitter and Facebook.