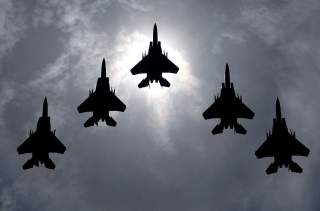 Boeing expects to see the fortunes of its defense business improve over the next several years and much brighter prospects for its tactical fighter products.  Nonetheless, the company faces uncertainty over how future U.S. defense spending will shape up.

The company expects that it will see robust demand for its military aviation products including the F/A-18E/F Super Hornet, the EA-18G Growler and the F-15 Eagle.

“We see some fundamentals strengthening in the U.S. defense budget as you well know, there is still uncertainty on exactly where the fiscal year 2018 budget will come out what the five-year plan looks like.”

Compared to just a few years ago, when Boeing faced the prospect of shuttering both its F-15 Eagle and F/A-18 Super Hornet product lines, things are looking up for the company’s tactical fighter business.

“We see some new energy in our fighter line for example,” Muilenburg said.

“Demand for the F-18 is returning and you see the five-year plans that have just been launched and the fiscal 2018 budget requests. Those all include Super Hornets, when in the past they did not. So that creates some opportunity for the future.”

Meanwhile, the Navy is looking at mid-life upgrades for the Super Hornet, which could prove to be lucrative for the company. In addition to more F/A-18s and upgrades for the existing Super Hornet fleet, Muilenburg noted that the Navy has expressed interest in more EA-18G electronic attack aircraft.

Things are also looking up for both the Super Hornet and F-15 overseas in the export market.

“We are continuing to see international interest. Kuwait’s interest in F-18s, as you recently saw the signing of the agreements—our approval of the agreements in Qatar for three F-15s with an option from another 36—Canadian interest in the Super Hornets,” Muilenburg said.

“We have continuing international interest in several places. So we can see both the F-18 line and the F-15 line being extended in a strong way well into the next decade.”

If Muilenburg proves to be correct and the F/A-18 and F-15 lines are extended into the 2020s, Boeing’s fighter production lines will survive long enough to compete for the U.S. Navy’s Next Generation Air Dominance (NGAD) or F/A-XX program to replace the Super Hornet. The company could also be a competitor for the U.S. Air Force’s next-generation Penetrating Counter-Air (PCA)—which is also sometimes called F-X or Next Generation Air Dominance [sharing the same program name as the Navy’s separate effort]—program to replace the Lockheed Martin F-22 Raptor and the F-15C Eagle air superiority fighters. However, the Pentagon needs to start working on those next-generation projects sooner rather than later for the sake of the industrial base.