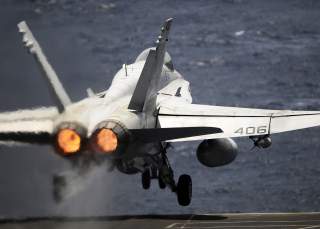 With the United States Navy struggling to make up a shortfall in its strike fighter inventory, the future looks bright for Boeing’s F/A-18E/F Super Hornet and EA-18G Growler.

The Navy plans to order at least 80 additional Super Hornets over the next five years including 14 jets in the fiscal year 18 budget request—and there could be more to come.

Moreover, as it is becoming increasingly apparent that the F/A-18E/F will be serving in the fleet until at least 2040, the Navy has requested funding for an advanced Block III version of the venerable Super Hornet in the 2018 budget. Many of those modifications are also likely to be used onboard the EA-18G Growler variant too.

The Navy needs enough aircraft in its inventory to have the capacity to fill out its air wings—particularly if the size of the fleet is increased.

“Boeing thinks they probably need a few more airplanes in order to have the right number of tails to last out into the 2040s given the current force structure,” Dan Gillian, Boeing’s F/A-18 and EA-18G program manager told The National Interest.

“So we weren’t surprised to see the ten Super Hornets added as the number one item on the FY18 unfunded priorities list.”

Boeing is planning to build the F/A-18 at a rate of two jets per month—slower than it has historically—but the Navy is also purchasing fewer jets per year than during the program’s heyday in the 2000s. But given the projected Navy buy, a total of 80 new Super Hornets should keep the production line open into the mid-2020s.

However, Boeing sees the need for more foreign and domestic F/A-18s, which Gillian said could drive the production rate back up. Indeed, the company projects that the Navy could order as many as 150 additional Super Hornets and 30 Growlers in total over the next several years in order to fill out its air wings.

Moreover, if Trump’s defense expansion materializes, the Navy might need even more aircraft.

Meanwhile, Boeing is working with the Navy to extend the life of its existing Super Hornets with the Service Life Modification Program. The SLMP will extend the F/A-18E/F airframe’s life from a projected 6000 hours out to 9000 hours.

“That’s another way we can help them have the right capacity for the future,” Gillian said.

The new Super Hornets coming off the production line in fiscal year 2019 could be built in an advanced Block III configuration—should the Navy want to get the ball rolling that quickly.

“We think we can cut Block III into production with the fiscal year ’19 airplanes,” Gillian said.

“We can also take the Block III capabilities and retrofit them into existing Block IIs the Service Life Modification Program. With those two programs, new production and SLM, we can build the fleet inventory of Block IIIs quickly.”

With the Navy officially requesting funding this year for the Block III, an advanced Super Hornet is no longer a notional project. It will—if Congress manages to pass a budget—eventually become a reality if current plans hold.

“We think the Block III nomenclature is significant–we worked with the Navy to get alignment on what those attributes are,” Gillian said.

“Block III, we’re excited to see, is funded in the FY18 budget—just under $265 million to support the development of the Block III capabilities.”

Unlike Boeing’s previous Advanced Super Hornet concept that made its debut in 2013, the new Block III aircraft is a more modest proposition that is designed to support the rest of the air wing including the Lockheed Martin F-35C Joint Strike Fighter, Northrop Grumman E-2D Advanced Hawkeye and the EA-18G Growler under the service Naval Integrated Fire Control Counter Air construct (NIFC-CA).

“That IRST sensor is a key capability Super Hornet brings to the carrier air wing that nobody else has,” Gillian said.

“It is a counter-air, counter-stealth targeting capability.”

Boeing and Navy plan to add five additional new features to the Super Hornet to round out the overall Block III package. That includes a set of conformal fuel tanks (CFTs) that will fit atop the F/A-18E/F’s fuselage, which would extend the Super Hornet’s range by roughly 120 nautical miles. The Block III aircraft would also come off the production line with a 9000-hour life airframe right from the outset. Boeing will also add some improvements to the Super Hornet’s low observables technology—though not as extensively as their 2013 effort that reduced the F/A-18E/F radar cross section by more than half.

“Buying a networked fighter made a ton of sense.”

The Block III will also have a powerful new computer in the form of the Distributed Targeting Processor- Networked (DTP-N) and powerful high-band connectivity in the guise of the Tactical Targeting Network Technology (TTNT) Internet protocol-based datalink. Additionally, the jet will receive a new advanced cockpit system with a 10-by-19 inch display and new crew interfaces in both cockpits.

“It’s about making the Super Hornet a smart node on the Navy’s network,” Gillian said.

“We think these collection of changes we’ve made in Block III help us to be a networked and survivable fighter in the future fight.”

The Tactical Targeting Network Technology (TTNT) and Distributed Targeting Processor- Networked (DTP-N) are already funded Navy programs of record for the EA-18G variant, thus integrating those technologies onto the regular strike fighter version of the airframe is a low risk proposition. However, the Navy might eventually consider retrofitting the advanced cockpit and the conformal fuel tanks onto the Growler variant to extend the range of the EA-18G and to ease the enormous crew workload onboard the electronic attack aircraft—particularly as the new Raytheon AN/ALQ-249 Next Generation Jammer comes online in 2021.

“They are all certainly applicable to the Growler, but those discussions with the Navy are ongoing,” Gillian said.

“With Super Hornet being the launch platform, moving them over into the Growler is a pretty straight forward application. They will work the same on both.”

There is also the potential that the Navy might buy additional Growlers. Navy projections beyond the Pentagon’s five-year defense plan call for 24 additional EA-18Gs and the service is already contemplating a life-extension program for the potent electronic attack platform. From Boeing’s perspective, the Navy should consider moving to an eight-aircraft Growler squadron onboard the carrier.

“So we see the need for some additional Growlers out there in the future.”

Thus, the Super Hornet and the Growler have a bright future and will continue to serve with the Navy for decades to come.