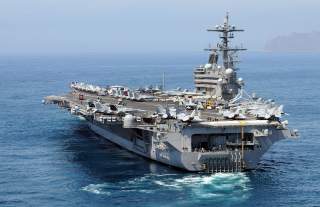 The People’s Republic of China loves testing American Presidents. And, as the years have gone by, they’ve started doing it sooner and with more intensity.

Recent research seems to back up this assertion. As Andrew Erickson of the US Naval War College recently pointed out, Beijing undertook 44 “increasingly aggressive intercepts leading up to the EP-3 incident” back in 2001, only 77 days after George W. Bush entered the oval office. The crisis, according to Erickson, was “intended to test [Bush’s] intentions and persuade him to adopt a more conciliatory approach to China.”

President Obama also had his own China test – this time a meager 44 days after his inauguration, in what is widely referred to as the USS Impeccable incident. According to Erickson, the move was designed as “part of a concerted Chinese effort to test [Obama’s] mettle and see if he could be pushed to reduce lawful US surveillance and reconnaissance operations in international waters and airspace.”

So what will Beijing do when it comes to Donald Trump? Let’s step back for a second and focus less on what China will do, but when it will do it— and that could be quite soon, as in now.

With Washington seriously distracted at home, the door is open for a number of actors (think not just China but Russia, Iran and/or North Korea) to make their move — and according to sources I have spoken with at the Pentagon, there is a real fear Beijing could make some sort of play fairly quickly.

I would argue that there could be no better time to test the Trump Administration from a Chinese perspective. In fact, there might not be a better time in the next several years to make a bold play in one of the strategically most important areas that Beijing considers its “core interest” and gain an important advantage over America. And these days, that likely means the South China Sea.

Consider where the United States is today, politically — a yuge, self-induced mess. Thanks to a number of what I would consider “unforced errors”, the new administration in Washington is constantly having to work through mini-crisis after mini-crisis. Whether it is the un-needed controversy over crowd sizes at the inauguration, near hourly “breaking news” over the latest Trump tweet and now a budding showdown over Trump’s executive action on refugees entering the country, foreign policy is not exactly front and center these days here in the nation’s capitol.

And from there things only get worse. There might not even be enough mid-level staffers, the backbone of many federal agencies, to respond to a crisis. When combined with the fact that many of the US State department’s most important positions are vacant, along with a rebooted National Security Council that just lost two of its most important members – none other than the heads of the Joint Chiefs and National Intelligence – there is what I could consider an obvious experience gap that is ripe for exploitation.

So, if China did decide to act swiftly, and specifically in the South China Sea, what would be its best play? My money is on an action that is bold, reinforces China’s claims of sovereignty and, most importantly, won’t be easy to retaliate against.

If I was President Xi Jinping here is what I would do to test the new administration’s intentions and at the same time see Trump squirm: declare an Air Defense Identification Zone, or ADIZ, in the South China Sea.

Now, on the surface, such a move seems highly escalatory, and not in line with other Chinese moves intended to test Bush or Obama. However, the stakes in Asia are greater than ever before, and with President Trump’s rhetoric on the South China Sea and Taiwan much bolder than that of any other new US administration just taking office, China might decide quickly it needs to see where the rubber meets the road — and fast. And there is no better way to do that than a South China Sea ADIZ.

How would Beijing make such a move? Easy, just dust off the playbook it used in 2013 when China did the same thing in the East China Sea.

Beijing may not be able to actually police either sea with great credibility if Washington or Tokyo really decided to press the matter, and in fact, to this day – according to senior officials in the Pentagon I have spoken with – it does not enforce its claims “with much vigor”. Nevertheless, four years ago it was able to set an important marker in the East China Sea opposite Japan. In the South China Sea President Xi might not be able to enforce the zone through the whole breadth of the massive nine-dash-line area, but he could create a credible military deterrent by permanently basing HQ-9 air-defense platforms and advanced fighter jets on as many of China’s “fake islands” as possible to make the zone as real as possible in a short amount of time.

So how would President Trump respond? Likely just as Obama did: send advanced bombers to fly into the zone right after it is declared. Trump could even order a naval response, conducting multiple freedom of navigation operations to make the point clear that Washington won’t ever fully accept China’s aggressive actions.

However, when it comes to such an ADIZ, it won’t be just China, America, or US allies who have the final say on its success or failure. Airlines that fly in the new the zone won’t risk their passengers lives with non-compliance and a possible shoot-down if a plane is misidentified, so they will of course send their flight plans to Beijing, making such a zone a reality.

But all of this should be no shock. A Chinese ADIZ in the South China Sea has been something that has been discussed and theorized for years now. And there might not be a better time to try and make it a reality.