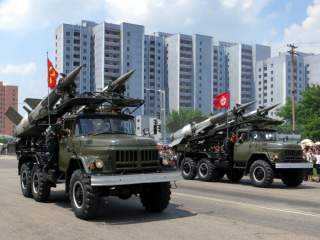 On Sept. 8, North Korea conducted its fifth nuclear test, the second since January 2016.

The regime confirmed the nuclear test, claiming to now have “a variety of smaller, lighter, and diversified nuclear warheads of higher strike power … standardized [to be] mounted on strategic ballistic rockets.

The U.S. Geological Survey reported a 5.3 magnitude seismic event near the Punggyi-ri nuclear test site.  The seismic level is consistent with, although higher than, North Korea’s previous nuclear tests. An expert commented that the explosion could have been 10 to 20 kilotons, the largest test to date and approximately the size of the Hiroshima explosion.

During Kim’s four-year reign, Pyongyang has conducted 37 missile tests, more than twice as many as his father Kim Jong Il did during 17 years in office. North Korea currently has the ability to threaten South Korea and Japan with nuclear weapons, target U.S. bases as far away as Guam, and continues to develop a nuclear-tipped intercontinental ballistic missile to threaten the American homeland.

United Nations Security Council members will convene an emergency meeting to respond to Pyongyang’s latest violation of U.N. resolutions. The council tends to reserve its harshest responses for nuclear tests. In March, the U.N. passed UNSCR 2270, which included the strongest sanctions to date against North Korea. The tougher resolution reflects growing international concern over Pyongyang’s growing nuclear capabilities and resolve to confront the regime’s defiance.

In response to the latest nuclear test, the U.S. and its allies should urge the U.N. to close several loopholes to the sanctions resolution, most notably eliminating the “livelihood purposes” exemption on the ban of North Korean export of its resources. But China will remain a reluctant partner, fearful that a more resolute international response could trigger North Korean escalatory behavior or regime collapse.

China’s reluctance to strongly pressure its ally provides Pyongyang a feeling of impunity that encourages it toward further belligerence. North Korea is willing to directly challenge China’s calls for peace, stability, and denuclearization by repeatedly upping the ante to achieve its objectives—including buying time to further augment its nuclear and missile capabilities.

Sanctions and targeted financial measures may take time to have an impact on the regime’s financial condition. But in the short term, such measures enforce U.S. and international law, impose a penalty on violators, and constrain the inflow and export of prohibited items for the nuclear and missile programs.

The difficulty will be maintaining international resolve to stay the course. Already, some have expressed impatience with the months-old sanctions and advocated a return to the decades-long attempts at diplomacy that failed to achieve denuclearization.