This Is Why China Fears THAAD 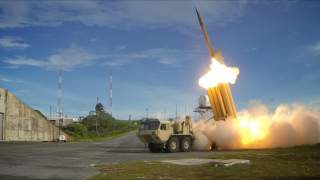 On Feb. 7, the United States and South Korea decided to begin official discussions on deploying the Terminal High-Altitude Area Defense (THAAD) system on the Korean Peninsula. In response, Chinese Ambassador to South Korea Qiu Guohong said that deployment of the system could destroy the Beijing-Seoul relationship “in an instant.” The floor leader of South Korea’s ruling Saenuri party, Won Yoo-cheol, called Qiu’s remarks “rude,” saying that they “disregarded the sovereignty and the security of the Republic of Korea.” While some analysts see China’s blunt position on this issue as a way to drive a wedge in the US-ROK alliance, Beijing’s motivations are defensive. China’s leadership is concerned about THAAD at the strategic level and sees the system as part of a broader US strategy to contain China.

THAAD in South Korea does not pose a direct threat to China. THAAD is an anti-ballistic missile system designed to destroy short to intermediate-range ballistic missiles during their terminal phase, meaning that the system cannot intercept missiles during their boost or mid-course phase. THAAD on the Korean Peninsula, therefore, cannot intercept Chinese missiles heading toward the United States. The X-band radar that is part of the system would be positioned and configured in “terminal mode” to intercept missiles originating from North Korea, instead of being used to scan deep into China. Deploying THAAD would not directly affect China’s nuclear second-strike capability vis-à-vis the US. Instead, the system would complement the Patriot system already in South Korea by adding an additional layer of protection and bolster deterrence against North Korea by increasing uncertainty of its capabilities and complicating its security calculations.

Beijing must be aware of this. Why, then, is it so fiercely opposed to THAAD?

One widely-touted explanation is that China seeks to drive a wedge in the US-ROK relationship by attempting to wield a veto over South Korea’s decision-making. As Adm. Harry Harris, commander of US Pacific Command, recently put it, it is “preposterous that China would try to wedge itself between South Korea and the United States for a missile defense system designed to defend Americans and Koreans on the peninsula.” This is a plausible, but not complete, explanation. China might see the US-ROK alliance as “a weak link,” but only in a relative sense. There are 28,500 US troops on the Korean Peninsula to act under the US-ROK wartime combined command, and the alliance is stronger than ever. Pressuring South Korea to stand down on THAAD would add friction but not break the alliance. Chinese do not issue unusually blunt statements on the system just to obtain marginal benefits.

To understand Chinese concerns about THAAD, first note that China sees the US as determined to maintain its place as the leading global power and unwilling to allow China to take its rightful place within the international order. As Chinese Vice Minister of Foreign Affairs Fu Ying notes, “China is politically treated as an alien and militarily seen as a potential target [by the United States]. Some of its alliances show the intention to take China as the source of security threat.” The Chinese believe that China is “hemmed in on all sides by the US, Japan, Taiwan, ASEAN countries, and Australia, and facing an increasingly unilateral, even imperialist, America” and perceive that Washington is redoubling efforts to contain China by “rebalancing” to Asia. Plainly, Beijing sees a more insidious motive behind the US push to deploy THAAD: containment of China with a regional missile defense network and increased US-Japan-ROK security cooperation.

China questions why the US and South Korea want to deploy THAAD, an expensive system that only protects against missiles at altitudes between 40 and 150 kms; a single THAAD battery costs about $827.6 million. The Chinese argue that deploying the system would be an imprudent and exorbitant investment and overkill because Seoul is so close to North Korea. Even a former United States Forces Korea commander, while supporting the deployment of THAAD, noted that “the best way to deliver a nuclear weapon to Seoul today is in the belly of an airplane” or even drones, if the North Koreans are able to improve their unmanned technology. Drones, in particular, could easily reach the South without being detected by air defenses. Three North Korean drones flew over Seoul undetected and took photos of the South Korean presidential residence in 2014; the South Koreans only found out because the drones crashed on their way back to the North. North Korea might not need a missile to drop nuclear bombs on South Korea, although Washington and Seoul have every reason to deploy an array of systems to protect their citizens against different threats from the North.

The Chinese, however, are wary of the fact that deployment of THAAD would integrate the Korean Peninsula-based defense systems with US and Japanese sensors in Northeast Asia. While Washington and Seoul see Beijing’s opposition to THAAD as an attempt to set a precedent for influencing South Korea’s defense decisions, China sees the United States setting its own precedent for US-Japan-ROK military cooperation with the broader goal of forming a trilateral alliance to contain China. Beijing has historically considered the Korean Peninsula to be critical to China’s security. As a Chinese general wrote in 1592, “Liaodong [a southern coastal part of Manchuria] is an arm to Beijing whereas Chosun is a fence to Liaodong.” During the Korean War, the Chinese lost more than half a million troops to prevent all of Korea from falling within the US orbit. Beijing would consider the emergence of a coherent military bloc that includes South Korea to be a major strategic setback. Beijing’s attempts to capitalize on the difficult state of relations between Japan and South Korea and flourishing economic ties between China and South Korea have very much been about preventing such an alliance from forming.

Beijing also fears that THAAD is a step in the US plan to encircle China with an interlinked set of missile defense systems that runs from Japan to Taiwan and even India. From the Chinese perspective, whether a regional missile defense network, under today’s circumstances, would be useful against China is irrelevant. The Chinese have great respect for the ability of the US to innovate. Beijing has to take into account the possibility that technology could improve, that more missile defense systems could be deployed throughout the region, and that they could be reoriented and reconfigured toward any other country besides North Korea. Even if THAAD were not aimed at China today, intentions can change quickly. The Chinese remember that after decades of hostility toward communist China, Richard Nixon and Henry Kissinger initiated a surprise opening to Beijing to end the Vietnam War and to contain the Soviet Union, only to treat China as a competitor later. Beijing does not trust Washington or its stated goodwill and fears that a regional missile defense network could emerge in Asia to be directed against China.

A regional missile defense network could complicate China’s ability to threaten or defend against US and allied assets in the region. The Chinese see forward-deployed US assets as having offensive purposes. A former Chinese admiral said once that U.S. naval presence near China is akin to “a man with a criminal record wandering just outside the gate of a family home.” Beijing fears that a regional missile defense network could provide a shield for US assets in the region, allowing the United States to threaten China more easily; a tactically defensive system could be used for strategically offensive objectives.

While overstated, Beijing’s concerns are understandable. According to Assistant Secretary of State for Arms Control, Verification, and Compliance Frank Rose, defending against Chinese or Russian nuclear missiles would be “extremely challenging – and costly.” However, the 2015 Department of Defense China report notes that China only has 50 to 60 land-based intercontinental ballistic missiles. China also recently emerged with a sea-based deterrent with four Jin-class nuclear-powered submarines with JL-2 submarine-launched ballistic missiles; the relative quality and size of China’s sea-based deterrent mean that it is vulnerable to US submarines and anti-submarine warfare capabilities. Chinese strategists have to consider the possibility that their small nuclear deterrent might not survive a conflict with the United States if missile defense systems expand and develop to blunt whatever is left of Chinese retaliatory capabilities after a US first or precision-guided strike.

If a US missile defense system is theoretically able to negate China’s second-strike capability, Washington might be able to coerce China in a military standoff, gaining concessions while preventing Beijing from meeting its own objectives. Understandably, the Chinese see any capability (for example, the X-band radar) that could affect China’s second-strike capability as a threat to their idea of strategic stability.