Why China, Russia and America Are Obsessed with Hypersonic Weapons 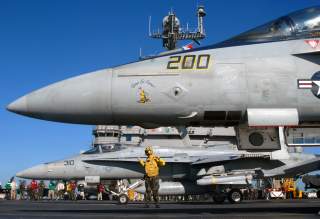 The United States, Russia and China are known to be heavily engaged in developing hypersonic weapons, but while the technology challenges are more or less similar, the goals of each of the players are significantly different.

The United States aim is for a new generation of conventional weapons and platforms covered by three major programs: a new Advanced Hypersonic Weapon (AHW) first tested in 2011; a Tactical Boost Glide Weapon (TBG) which is a rocket glider that can reach speeds of 20,921 kilometers per hour, or MACH 20, and uses a scramjet/ramjet engine (itself based on the hypersonic test vehicle HTV-2); and an Advanced Full Range hypersonic Engine program (AFRE) which is intended as a reusable hypersonic engine that combines an off the shelf jet turbine engine with a dual mode ramjet engine.

The US Army Space and Missile Defense Command working with Sandia National Laboratory is in charge of AHW development. The Defense Advanced Research Projects Agency and the US Air Force are working on the Tactical Boost Glide program.

Recently the US Air Force awarded Lockheed a $1 billion contract for a hypersonic conventionally armed cruise missiles that can be launched from bomber and fighter aircraft. The US has a Conventional Prompt Global Strike Program that will use hypersonic cruise missiles capable of striking any target in the world within an hour.

The problem in any conventional hypersonic program is how does a defender know if the incoming weapon is conventional or nuclear?  Today there is no satisfactory answer to the question. Russia, China or even North Korea or Iran may believe that a hypersonic cruise missile or space launched glide vehicle is nuclear and may, therefore, launch their own weapons in response, especially since the chance to destroy any incoming hypervelocity weapon is poor. Even so, the US is sticking to the argument that its hypersonic weapons are only conventionally armed.

While the United States wants to speed up conventional weapons delivery against any target anywhere, it also will be able to overcome most aircraft and missile defense systems, even the much-ballyhooed Russian S-400. That’s because hypersonic vehicles are hard to detect, hard to track and hard to kill. Hypersonic vehicles also can operate autonomously over targets, don’t need to rely on GPS systems for guidance and probably cannot be electronically jammed.

The idea of overcoming missile defenses is the primary objective the Russian hypersonic program addresses, but for the Russians their hypersonic weapons are nuclear, not conventional. There are three such systems so far known: the 3M22 Zircon (or Tsirkon), which is intended either for ship or submarine launch and is relatively short range; the YU-71 and YU-74 for launch on ballistic missiles and the air-launched KH-47M2 Kinzhal (“Dagger”), a high precision air to surface missile with a range of 2,000km and a claimed speed of Mach 10.

The 3M22 Zircon, which is said to have a speed of Mach 7, has a range of 241km to 434km. It is essentially an anti-ship weapon, although it can be used against land targets. It was successfully tested in 2017 and two Kirov class battlecruisers, the Admiral Nakhimov (2018) and the Pyotr Veliky (2022), are being fitted to accommodate the Zircon in the same launchers that can also be used for Kalibr cruise missiles.

The Zircon uses a scramjet engine after it is launched with a rocket boost. The Zircon warhead may be nuclear or conventional, although the well-regarded Stratfor analytical group speculates the warhead is nuclear. Zircon is designed to challenge the naval power of the United States and its NATO allies and defeat shipboard defenses.

US slow to deploy

The Yu-71 is a hypersonic attack aircraft and missile glide vehicle either for missiles or for Russia’s bombers including Russia’s proposed stealth bomber, the Tupolev PAK-DA. The Yu-71 has a claimed speed of 11,200km/h and may be launched from the new Russian super-heavy MIRVed ICBM known as Sarmat (Samaritan). The Yu-74 is a hypersonic glide vehicle also launchable from the Sarmat, with a 10,000km range.

The Yu-71 and Yu-74 are augmentations to ballistic missiles and weapons for long range bombers that the Russians appear to believe can overcome US and allied missile defenses. While the US is slow in deploying a full scale ballistic missile defense system, it has deployed THAAD against short and intermediate range ballistic missiles in South Korea, Turkey and the UAE and it has put the exoatmospheric Ground Based Interceptor (GBI) in Alaska at Fort Greely and in northern California at Vandenberg Air Force Base.

The US and Japan have also jointly developed the SM3-Block 2a missile (RIM-161) advanced missile which is part of the Aegis Ballistic Missile Defense System used by the US Navy, Japan’s Self Defense Forces and at Redzikowo in northern Poland for NATO defense.

The Russians are betting that its hypervelocity vehicles can defeat American, NATO and allied missile defenses.

Testing of the Yu-71 and Yu-74 is highly secretive, but what has leaked out is that most of the tests have been unsuccessful. If the Yu-71 and Yu-74 can’t be deployed, the Russians will have to rely on the KH-47M2 Kinzhal to penetrate US and allied missile defenses. The Kinzhal is carried by aircraft and is more likely to be a factor in the NATO theater. It carries a nuclear warhead of a size unknown.

Many analysts think any general war along the NATO boundary will involve tactical nuclear weapons because this is how Russia’s military thinks it can rebalance the correlation of forces which, otherwise are negative for Russia when compared to NATO. In effect, Kinzhal could become the Russian replacement for the cancelled SS-20 mobile missiles that were eliminated under the Intermediate Range Nuclear Forces (INF) treaty, that also eliminated the US Pershing II deployment in Europe. The Kinzhal is air launched and therefore is not covered by the INF Treaty.

China, at least so far, has announced and may have deployed the DH-17, previously called the WU-14, hypersonic glide vehicle which has a speed of somewhere between Mach 5 and Mach 10 and features a combined cycle engine and glides atop the earth’s atmosphere.

It has been tested a number of times and China claims it hit its targets.  Once the DH-17 is ready for deployment it may become an add-on to the DF-21D missile, already portrayed as a “carrier killer.” Adding on the DH-17 would significantly extend the range of the anti-ship DH-21D missile and create serious problems for even a robust missile defense system such as Aegis and its new SM3-Block 2a missiles.

In effect, China’s primary goal for its hypersonic vehicles is to support the execution of its strategy to chase away the US carrier battle groups operating in the East and South China seas region by executing an effective area denial strategy. Reports say the DH-17 will become operational in 2020.

No one yet knows if China can actually hit a moving aircraft carrier, or if the DH-17 can survive against a clustered response by US missile ships that are part of a carrier task force. When China deploys the DH-17 will the US Navy back away from trying to support freedom of navigation in the Pacific? Not likely.

While the rise of hypersonic weapons certainly presents new challenges, it is far too early to judge if they are a game changer.

What we do know about the rise of hypersonic weapons is that we will see more of them in future.