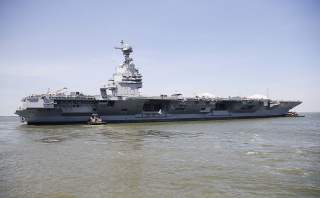 Designed with the latest technology, Ford is not without problems. Both EMALS and the Advanced Arresting Gear System have run into considerable problems, and the Navy briefly pondered finishing Kennedy with a more traditional, proven arresting gear system. Despite developmental delays, it appears both new takeoff and landing systems are nearly ready. According to the Navy, Ford is 99 percent done and 93 percent of testing is complete. Ford is scheduled for delivery to the Navy this April.