Why China Should Fear the US Military's Third Offset Strategy 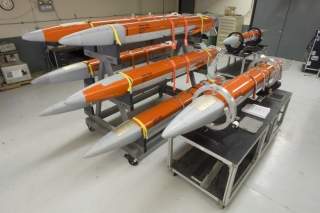 The Pentagon has never been at a loss for cute catch phrases when it comes to describing the Next Big Thing in the way of warfare.

In the 1900s, the U.S. military was all about the “revolution in military affairs” (RMA) and “network-centric warfare.” This gave way to “force modernization” in early 2000s, when Donald Rumsfeld was in charge. By 2010, it was “AirSea Battle” (ASB), later transmuted into the jaw-mangling “Joint Concept for Access and Maneuver in the Global Commons.”

Today, the buzzword of choice is the “third offset strategy.”

Like many initiatives coming out of the Pentagon, it is long on ambition and short on details. Yet people in the Asia-Pacific had better become familiar with this new idea, as it will likely have a significant impact on the region.

The concern is that the US is losing its “near-monopoly” in “reconnaissance-precision strike,” as potential adversaries are now capable of fielding their own reconnaissance-strike networks to challenge US power projection. As such, the US military is increasingly vulnerable to long-range strike, modern integrated air-defense systems, more capable underwater systems, and attacks in the space and cyber domains.

The third offset strategy is both about developing new capabilities and about exploiting state-of-the-art enabling technologies.

On the one hand, third offset include many cutting-edge technologies, such as robotics, autonomous systems, miniaturization, big data, and advanced manufacturing, including 3-D printing.

On the other hand, it also entails the development of new pieces of military equipment, including hypersonic missiles, directed-energy weapons, electromagnetic rail guns, and naval mines.

What does the third offset strategy have to do with Asia-Pacific? Almost certainly it is intended to deal with the growing anti-access/area denial (A2/AD) challenge posed by China.

As the US military begins to address the challenges and opportunities created by third offset technologies and strategies, one of the most critical ways in which these ideas will be tested is with China and its growing capacities to create “no-go” sanctuaries in the far western Pacific, particularly in and around the East and South China Seas.

According to the Center for Strategic and Budgetary Affairs (CSBA), “anti-access (A2) strategies aim to prevent US forces from operating from fixed land bases in a theater of operations,” while “area-denial (AD) operations aim to prevent the freedom of action of maritime forces operating in the theater.”

As such, China is trying to obtain the means by which to prevent US forces (and, by extension, its regional allies and partners) from entering or operating with impunity within these seas.

China possesses several strategic advantages when it comes to A2/AD. In the first place, it has the “homefield advantage” of being able to engage in military operations quite close to its national territory. Most of its forces that could be employed for A2/AD operations are already positioned on or near the Chinese coast and are therefore rapidly deployable to likely conflict zones in the East and South China Seas.

These forces are being reinforced by military buildups on Chinese-held islands in the regional seas, such as the heavily militarized Woody Island, and by the construction of artificial islands in the Spratlys, many outfitted with airstrips and radar. These islands greatly extend the PLA’s theoretical range of operations around the South China Sea.

Secondly, the People’s Liberation Army (PLA) has, over the past 15 years or so, acquired considerable hardware that boosts its A2/AD capabilities. These include an aircraft carrier, new submarines, new types of anti-ship missiles, and modern sea mines.

In addition, modern fighter jets and an expanding array of short-, medium-, and intermediate-range ballistic missiles, as well as long-range land-attack cruise missiles, have endowed the Chinese military with new and improved capabilities for long-range, precision attack of US and allied bases in and around the far western Pacific, including Guam, Okinawa, and Taiwan.

What makes this strategy different?

Third offset capabilities are all about defeating A2/AD, therefore, and no nation today more embodies the A2/AD concept than China. That said, there is a lot about the third offset strategy that is quite familiar.

This is, however, not that much different from Rumsfeld’s “force transformation” efforts of a decade ago; perhaps there is a bit more emphasis on robotics and automation, directed-energy weapons, and extra-long precision-strike, but many of these initiatives were already underway long before the third offset was enunciated.

In addition, while cyber may be the next great battle space, most of us already knew that, and it is a certainty that the US military is almost certainly elbow deep into the planning stages for operations in cyberspace. Other technologies or capabilities often touted under the third offset umbrella – such as the Long-Range Strike Bomber (LRS-B), sea mines, networked expeditionary forces, etc. – also do not seem that radical.

In the first place, it does not attempt to be as awesome-sounding as the “revolution in military affairs,” nor does it aspire to be an all-encompassing war-fighting doctrine like AirSea Battle. Rather it is an effort to bundle together and coherently pursue a number of promising technologies that could preserve the US military’s competitive edge.

And since it is much more modest in scope and goals than any RMA or new doctrine, it actually stands a much higher chance of succeeding – and that should give A2/AD-aspiring actors like China real cause for worry.

Richard A. Bitzinger is a Senior Fellow and Coordinator of the Military Transformations Program at the S.Rajaratnam School of International Studies, Nanyang Technological University, Singapore.