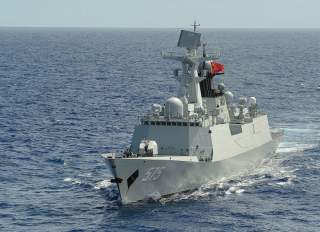 Conventional wisdom has long painted the Chinese as strategic and methodical planners, masters of statecraft with great foresight. The West, and the US in particular, is hopeless in comparison. For many strategists, we aren’t even on the same board: Chinese are playing Go while the West plays checkers.

It’s time to put that shibboleth aside. After misjudging the balance of power following the Great Recession of the late 2000s -- overestimating the decline of the United States -- China has engaged in a series of confrontations in the East and South China Sea. These engagements have produced more problems than successes. Moreover, Beijing has doubled-down on this behavior, unleashing a barrage of threats and practicing high-handed diplomacy toward its neighbors. This is not visionary or strategic genius; in fact, it looks downright dumb.

South Korea was one target of China’s offensive rhetoric. In response to Seoul’s decision to implement the US-manufactured Terminal High Altitude Area Defense system (THAAD) -- a missile defense system that aims to counter North Korean capabilities -- China has vented its displeasure, using economic and political tools to hammer home its point. China opposes any deeper US-ROK defense cooperation, and missile defense is a focus of its displeasure. China has blocked South Korea’s media exports, including popular television dramas and pop music known as Hallyu. A recent article in Global Times, a hardline Chinese news outlet, reported that programs involving South Korean stars would be blocked, and that exporting of South Korean culture will inevitably feel the chill in China if Seoul sticks to THAAD deployment. The article concluded, ominously, that “South Korea is asking for trouble.”

China’s attacks aren’t limited to economic threats and scapegoating South Korean pop stars. China is concerned that THAAD’s X-band radar, the largest air-transportable X-band radar in the world, will weaken China’s nuclear deterrent. Reminding South Korea of China’s role at key moments, a recent People’s Daily article stated that “the Korean Peninsula situation would be very different. Does South Korea really want a taste of that?”  In other words, Beijing seeks to punish Seoul for trying to defend itself from North Korean missiles.

A Chinese-language article in DW News reported on the upcoming G20 summit, and identified President Park Guen-hye as “undoubtedly the most awkward or embarrassing guest that will be in attendance.” It cited scholars who believe China “must punish South Korea to prevent other countries in the region from making similar moves,” and referred to an old Chinese phrase: kill the chicken to warn the monkey. The article continues, “Beijing should apply strong pressure and not hesitate to allow her downfall,” referring to recent opposition voices in South Korea raising the question of impeachment. This is a striking contrast with praise that Park received less than a year ago when she was wooing China to help deal with North Korea.

Park rebuffed Chinese criticisms and solidified her stance on THAAD, stating that it is a “measure of self-defense toward North Korea’s reckless provocations.” Even the South Korean politician who raised the subject of impeachment has stated that his remarks were “overblown by the Chinese media and that they quoted my words as they wished.”

Australia experienced China’s lash after it voiced support for the Permanent Court of Arbitration’s (PCA) ruling on territorial claims in the South China Sea. Global Times again broke ground in an article headlined “Paper cat Australia will learn its lesson.” The article called Australia “uncivilized,” with origins as an “offshore prison of the United Kingdom” and colonized in “a process filled with the tears of Aboriginals.” It also concludes with a warning, telling Canberra to not step into the South China Sea or “it will be an ideal target for China to warn and strike.”

China isn’t just offending countries and their governments. It is also making explicit threats. Addressing South China Sea issues, four Chinese sources with close military and leadership ties were interviewed by Reuters, with one stating that “the People’s Liberation Army is ready,” while another suggested that “we should go in and give them a bloody nose like Deng Xiaoping did to Vietnam in 1979.

On July 8, four days before the PCA ruling, China threatened that it could “tow away or sink the stranded old ship, and resolve the standoff once and for all,” referring to the Philippines BRP Sierra Madre ship that is marooned on the disputed Spratly Reef. The author then warned that China “can turn the Huangyan Island into a military outpost” if it felt obliged. In response to British Prime Minister Theresa May’s postponement of the new Hinkley Point nuclear power plant in the UK -- of which China holds 30 percent -- Xinhua threatened a cooling of Sino-UK ties which many consider “a golden era.” In another article Xinhua declared that any interruption “will surely stain its credibility as an open economy and might deter possible investors from China and other parts of the world in the future.”

The guiding principle for Chinese diplomacy for over two decades has been Deng Xiaoping’s 24 character strategy: Observe calmly; secure our position; cope with affairs calmly; hide our capacities and bide our time; be good at maintaining a low profile; and never claim leadership. The brazen and increasingly pointed statements from Beijing are anything but consistent with the admonition to “cope with affairs calmly” and “maintain a low profile.”

There are several explanations for China’s behavior. One is the Chinese officials genuinely believe that the balance of power has shifted in the region and that Beijing is now in a position to settle scores and right historical wrongs. In short, this cadre of foreign policy decision makers may well believe that Deng’s guidance no longer applies to today’s China.

A second explanation emphasizes the nationalism that is increasingly evident throughout China, The domestic backlash after the 1999 US bombing of the Chinese embassy in Belgrade and that which followed the 2012 Diaoyu/Senkaku Islands dispute with Japan alerted the Chinese leadership to the political costs of being insufficiently zealous in protecting China’s interests and image and that awareness is heightened during an economic slowdown.

A third possibility is that China thinks that pressure pays off. After all, despite the tough talk, Philippine President Rodrigo Duterte has committed to bilateral talks with Beijing within a year as well as promising that he will not raise the international ruling during a September ASEAN meeting in Laos. On Aug. 24, Chinese and Japanese foreign ministers agreed to cool tensions in the East China Sea, likely paving the way for a meeting between Xi Jinping and Shinzo Abe on the sidelines of the G20 summit in September. A variant of this logic argues that Beijing needs to remind other countries that defying its wishes has consequences; Chinese threats are proof that it is not a paper tiger and keeps its smaller, weaker supporters in line.

This is cherry picking at its best. There is no sign that Japan has softened its position on any key dispute with China, and the pressure on South Korea and Australia has backfired. This month, South Korea reached a deal to purchase the Aegis Baseline 9 system, which will outfit three South Korea destroyers and provide a mobile radar system that exceeds THAAD’s capabilities. In Canberra, a decision was made to block the sale of Ausgrid, Australia’s biggest energy grid, to two Chinese companies on the grounds of national security concerns, a move that has further strained relations between the two countries.

The assertion that pressure works also ignores the backlash against China throughout Asia and the growing clamor for closer security ties with the US among regional governments.

While these all likely influence Chinese diplomacy, a more worrying explanation is most compelling: decision-making in Beijing is becoming more consolidated at the highest levels of the leadership, and there are few ways and little inclination to challenge or change the course and momentum of foreign policy once it is set. As Xi amasses more power, the readiness of others to question decisions from above is reduced, especially given the potentially high cost of dissent. No one is prepared to be out of step with the leadership either in regard to policy in place or the vacuums that occur as developments arise. Today, a hard line is a safe line and absent a correction from on high -- which some could take as a tacit admission of failure (which makes a reversal even harder) -- the status quo prevails and intensifies.

This poses a dangerous challenge to the US and regional governments. They cannot back down because that risks encouraging China to be more aggressive still. They must avoid a hard line that puts Beijing in a corner (admittedly of its own making) and forces it to confront those countries out of pride or a sense of nationalism. In short, those governments must help China work its way out of the holes it has dug, protecting all countries’ interests and saving face for Beijing. It is a narrow line, and one that is difficult to navigate, but it is also, ultimately, what real leadership demands.