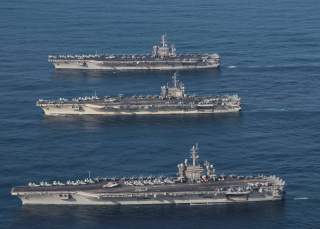 China has reportedly deployed surface-to-air missiles and anti-ship cruise missiles to on Fiery Cross Reef, Subi Reef and Mischief Reef in the Spratly Islands chain in the South China Sea. That is in addition to China’s recent installation of jamming equipment in the region, which is designed to disrupt communications and radar systems.

The Chinese land-based anti-ship cruise missile is believed to be the YJ-12B, which would allow China to strike surface vessels within 295 nautical miles of the reefs. The long-range surface-to-air missiles are the HQ-9B, which can engage targets at ranges of 160 nautical miles. Intelligence assessments say the missile platforms were moved to the outposts in the Spratly Islands within the past 30 days, according to sources who spoke to CNBC on the condition of anonymity.

The White House is threatening consequences for the Chinese actions. "We're well-aware of China's militarization of the South China Sea," White House Press Secretary Sarah Huckabee Sanders told reporters. "There will be near-term and long-term consequences."

The Pentagon is also raising concerns about the Chinese missile deployment. Moreover, the Pentagon suggested that Beijing actually benefits from America’s military presence in the region. "We have been very vocal about our concerns about them militarizing these artificial islands," Defense Department spokeswoman Dana White said. "China has to realize that they have benefited from the free navigation of the sea and the U.S. Navy has been the guarantor of that."

The addition of the land-based YJ-12B variant cruise missile could pose a significant challenge for U.S. forces. The Missile Defense Alliance describes the weapon as capable:

“The YJ-12 poses a number of a number of security concerns for U.S. naval forces in the Pacific and is considered the ‘most dangerous anti-ship missile China has produced thus far.’ The danger posed by the YJ-12 comes from its range of 400 km, making it the longest-ranged ACBM ever engineered, and its ability to travel at high rates of speed (up to Mach 3). This makes it difficult for Aegis Combat Systems and SM-2 surface-to-air missiles that protect U.S. carrier strike groups to identify and engage the missile since it can be launched beyond their engagement ranges, which greatly reduces the U.S. Navy’s time to react. Protection against the YJ-12 is even more difficult due to its cork-screw-like turns which allow it to evade final defenses. With the combination of Chinese Flankers, YJ-12’s can potentially reach up to 1,900km which could cause an even larger problem for the U.S. than China’s DF-21D ASBM. Deployment of the YJ-12 and the development of related ASCMs also demonstrates China’s desire to field anti-access and area denial capabilities in case of future conflict.”

Meanwhile, the HQ-9B—while not as capable as the Russian S-300V4 and S-400—is a formidable anti-aircraft weapon system. “In operational planning terms, the HQ-9 should be treated as equivalent to early model SA-20 variants, with the caveat that the different acquisition radar package will impose unique planning requirements, especially in terms of EWSP and SOJ requirements,” Carlo Kopp wrote in Air Power Australia. “The possibility of FT-2000 anti-radiation rounds being mixed into HQ-9/FD-2000 TEL payloads presents a series of operational risks all of its own. The high mobility of the HQ-9 family of weapons will present similar SEAD/DEAD challenges as seen with late model SA-10, SA-20 and SA-21 variants, especially if a disciplined “hide, shoot and scoot” doctrine is followed by HQ-9 operators. Chinese sources claim that the HQ-9 family of systems employ much newer computing technology than imported Russian S-300PMU/PMU1/PMU2 systems. This suggests a equal or superior computing capability for signal processing, data processing and guidance support. The HQ-9 family of systems should not be underestimated - they will be credible equivalents to the SA-20 family of systems.”

The deployment of the missiles is a massive provocation. “If these missile systems remain on China’s Spratlys bases, no amount of diplomatic rhetoric will placate other South China Sea countries and extra-regional powers like the United States, Japan, and Australia,” Steven Stashwick wrote in The Diplomat. “It seems likely that China will gage the reaction to this deployment to assess whether, or at least how quickly, it can deploy even more capable force-projection systems to the islands, like fighter and bomber aircraft, and conventional ballistic missiles capable of striking ships and bases at even greater distances, even beyond the South China Sea.”