Why China's Next Aircraft Carrier Will Be Based on Soviet Blueprints 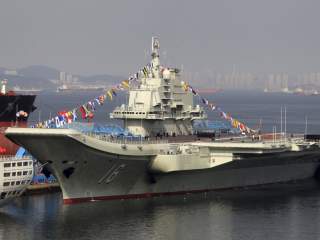 China has at last formally acknowledged that it has a new aircraft carrier under construction, the first to be built in China and the second in the People's Liberation Army-Navy's order of battle.

The PLA Navy appears to have embarked on a substantial carrier program, probably with the intention of creating four and perhaps up to six carrier battle groups (Chinese commentators have publicly acknowledged the need for at least three units in order to have an effective carrier capability). The rehabilitated ex-Russian carrier Liaoning, designated Carrier 16, has been the start of this effort, although its reliability has yet to be confirmed.

Experience gained with the ship will be used to evolve the follow-on units which are entering production. However, the challenge involved with these new carriers will not so much be the build, but the design. That the first new-built carrier will be in most respects a copy of the Soviet designed Liaoning should be no surprise. This is China's only practicable course of action if it is to get another unit into service in good time.

The PLA Navy was able to extract eight truckloads of detailed plans of the Liaoning from the Ukrainian vendors. These will have to be the foundation of the present activity because China is now facing the same reality that has dogged the efforts of all the major navies of the last century. The greatest restraint on naval expansion in the industrial age has been neither budgets nor disarmament treaties. It has in fact been the lack of drafting expertise to translate the design concepts of naval architects into the detailed compartment-by-compartment drawings that allow the shipbuilders to do their work (arguably, this has been a key problem for Australia with the new Air Warfare Destroyers). The scale of the effort involved is demonstrated by the report that the Liaoning's documentation amounted to many tons of paper.

Although the PLA Navy is pursuing multiple paths of technology transfer from overseas, both legitimate and covert, its shipbuilders must recruit and train sufficient expert indigenous design staff in very large numbers at a time when the Chinese navy is seeking to introduce many different new classes: submarines, cruisers, destroyers, frigates, amphibious ships, replenishment ships and light craft. In particular, the demands of the submarine force, both nuclear and conventional, must be a higher priority than the carrier force for the PLA Navy as a whole, and for the national leadership.

For this reason, Carrier 17 (as it is described in Chinese social media) will almost certainly be a direct derivation of the original Soviet blueprints for the Liaoning.

For example, if the PLA Navy wants a higher capability air group, this will require catapults for launching aircraft. There has been some evidence of Chinese interest in electromagnetic systems (EMALS) along the lines of the units being developed for the U.S. Navy's next carrier, the USS Gerald Ford, but the PLA Navy faces risks whether it takes this innovative approach, or its ICCALS (Internal Combustion Catapult Aircraft Launch System) alternative, or selects more proven but complex steam catapults. Introduction into service of Carrier 18 is thus unlikely before 2025, although the production rate could accelerate after this.

The actual capability which can be generated by the carriers depends on their air groups, something often missed by pundits who fixate on the vulnerabilities of aircraft carrier. So far, the only true marinised fixed-wing aircraft in the PLA Navy inventory is a fighter with limited strike capabilities. Notably, all the Chinese videos publicizing the operations of the Liaoning have shown only this aircraft, the J-15, operating from the ship.

For a Chinese naval air group to have true all-round capability independent of shore-based air power, airborne early warning and anti-submarine warfare (ASW) aircraft will be required, as well as attack aircraft configured for electronic warfare. The PLA Navy will also need to devote much more attention to helicopters, both as part of the carrier groups to support ASW and anti-surface operations, and to operate from its other surface ships in the same roles. All this effort will take the PLA Navy at least a decade, whether or not significant modifications are required to fit the new carriers for such new types.

Finally, it must be understood that the carrier program is unlikely to be aimed at the United States, at least in the medium term. The PLA Navy must be acutely aware, not only of the relative inferiority of the Liaoning and its air group to any American carrier battle group, but of the vulnerability of their new units to sophisticated, large-scale, high intensity attack. The utility of the carriers will lie in their ability to assert Chinese interests with other nations and in other circumstances than a putative 'air-sea battle' encounter with U.S. forces.

James Goldrick AO, CSC joined the Royal Australian Navy in 1974 and retired in 2012 as a two-star Rear Admiral. He commanded HMA Ships Cessnock and Sydney (twice), the multinational maritime interception force in the Persian Gulf and the Australian Defence Force Academy. This article first appeared in the Interpreter.