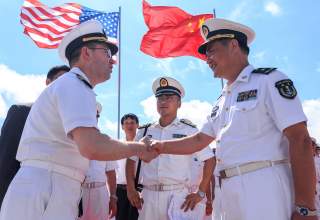 Under Xi Jinping, China has intensified its focus on “seizing discursive power” (话语权) and “propagating China’s voice” at the global level. Indeed, the recent One Belt, One Road summit in Beijing has highlighted China’s ambitions to exert its influence upon the international order—and adjust it to its own advantage. For China, this concept of discursive power is often considered a critical aspect of its comprehensive national power. Indeed, to the Chinese Communist Party (CCP) and its People’s Liberation Army (PLA), information is a weapon. The CCP has pursued Internet control through an extensive, adaptive system in order to avert threats to social stability and its survival, while seeking to assert its influence through shaping public opinion with domestic and external propaganda. Concurrently, to operationalize discursive power, the CCP and PLA have built upon an extensive history of political warfare to engage in concerted influence operations, with Taiwan as the primary target but also against the U.S. and worldwide. These dimensions of Chinese discursive power—Internet control, propaganda work and political warfare—enable the CCP’s defense of China’s core sovereignty, security and development interests, while advancing national strategic objectives.

For the CCP, Internet control is an integral instrument to ensure social stability, which remains a paramount concern for the regime. From the CCP’s perspective, this “Internet management” is undertaken for defensive purposes, critical to counter the “infiltration” of “hostile foreign forces” and their adverse influence of on social stability. Consistently, the Chinese leadership has emphasized political and ideological security in its focus on cybersecurity. Since the Internet first arrived in China, Chinese authorities have sought to take advantage of the associated economic opportunities while mitigating political risks. The Great Firewall, operated by the Ministry of Public Security under the aegis of the Golden Shield Project, has been a critical tool to enable comprehensive, nationwide censorship and surveillance. Despite persistent concerns that the Great Firewall undermines innovation, while acting as a barrier to digital trade, the Chinese leadership has evidently judged that the costliness of this system is outweighed by its importance. This mechanism is supplemented by extensive efforts undertaken by the so-called “50 Cent Party,” those employed or paid by the government to fabricate an estimated 448 million comments a year. In practice, this massive effort focuses on curtailing content that could lead to collective action, often through deliberate distraction.

Although the constraints associated with China’s exercise of its national “cyber sovereignty” (网络主权) have provoked criticism, Beijing may see recent events as a vindication of and rationale to redouble its approach. For the Chinese leadership, the Arab Spring was a particularly powerful demonstration of the destabilizing impact of social media, provoking concerns over Western attempts to instigate color revolution in China. Under Xi Jinping’s leadership, the Internet crackdown has consistently intensified, including attempts to curtail the use of VPNs to circumvent the Great Firewall and even recent plans to punish VPN operators and users. The imposition of requirements for real-name registration and subsequent campaigns to ensure its enforcement could further enhance the state’s control, through eliminating anonymity online. Looking forward, the extensiveness and sophistication of China’s Internet control apparatus will likely continue to increase. Notably, there are also indications of initial efforts to employ big data and artificial intelligence to increase the sophistication of censorship, including on WeChat. This newly algorithmic approach to censorship, based on advances in machine learning, will likely expand, bolstered by accelerated research and development in artificial intelligence.

Simultaneously, the CCP has attempted to exercise discursive power in its efforts to influence perceptions at home and abroad, through extensive, coordinated propaganda efforts. The CCP’s Central Propaganda Department (中共中央宣传部) is responsible for leadership over media in China. In practice, official Chinese media organs, notably Xinhua, People’s Daily and CCTV, exercise a monopoly over news. In the past several months, there has been a crackdown on major online news outlets, such as Sina and Phoenix, for their original reporting. The Cyberspace Administration of China has accused these outlets of publishing “fake news,” condemned their “illegal publication of harmful information,” and restricted their content to only official syndicated sources, then recently redoubling its crackdown against them. Through eliminating independent sources of information, the CCP seeks to dominate public opinion with its own narrative. Certainly, the Chinese leadership has demonstrated the capability to mold and mobilize public opinion to conform to its foreign-policy agenda. Although even China’s highest echelon of leadership has criticized their propaganda as ineffective, there are concerted efforts underway to adapt propaganda to take advantage of new media, while appealing to younger Chinese, which may be gaining traction. However, the efficacy of this propaganda may have limitations in practice.

Building upon its proficiency in domestic propaganda, the Chinese leadership has increasingly sought to exercise its discursive power at a global level. In recent years, official Chinese media outlets have expanded to publish in an increasing number of languages, including English, Russian, Japanese, Korean, French and Spanish. The English-language China Daily, run by the Central Propaganda Department, and Global Times, published under the aegis of CCP newspaper People’s Daily, focus on conveying China’s officially sanctioned perspective on the news to foreign audiences. The international circulation of China Daily has progressively increased, including paid inserts into major U.S. newspapers in at least eight major U.S. cities—New York, San Francisco, Washington, Chicago, Los Angeles, Houston and Atlanta—launched in 2011. These newspapers include the Boston Globe, Wall Street Journal and Washington Post. In early 2017, state broadcaster CCTV launched the rebranded China Global Television Network (CGTV), intended to advance Chinese influence and soft power worldwide, including with a production center in Washington. Xi Jinping has called for CGTV to “tell China’s story well” and gain international influence. Although such concentrated efforts to advance China’s soft power have achieved only limited success to date, these ongoing charm offensives—supported by related efforts, such as China’s global network of Confucius Institutes and increased influence over Hollywood—may start to achieve further traction in the years to come, signifying China’s rise as a power ever more able to “influence the global information ecosystem.”

Within the PLA, China’s attempts to exercise discursive power take on operational form. For the PLA, the “three warfares” (三战), which include public opinion warfare (舆论战), psychological warfare (心理战) and legal warfare (法律战), have utility across the spectrum from peacetime to wartime, through the weaponization of information. The underlying approach associated with the three warfares—the aim of “disintegrating enemy forces” (瓦解敌军) through non-kinetic measures—dates back to the earliest days of the Red Army and draws upon Marxist-Leninist ideology. Traditionally, the former General Political Department has been integral to the PLA’s political warfare. In recent years, the PLA has focused on the operationalization of the three warfares to ensure their efficacy in the information age, as an organic element of modern warfare occurring throughout the course of conflict. To contest discursive power requires the integrated employment of the three warfares, since these measures are seen as complementary and mutually reinforcing in warfare and political or diplomatic struggle alike. The objective is to undermine the adversary’s resolve, “will to fight” and decisionmaking. In practice, the PLA’s focus on the integration of peacetime and wartime implies perceptual preparation of the battlefield intended to enable decisive success, ideally even “winning without fighting.” However, in a wartime contingency, the three warfares would be closely coordinated with conventional military operations.

Currently, the PLA could be on track to enhance its capabilities to wield discursive power through the three warfares. The PLA’s Base 311, its Three Warfares Base, has focused on targeting Taiwan through three warfares techniques, including multiple forms of propaganda and targeted exchanges. In the course of the PLA’s ongoing organizational reforms, there are indications that Base 311, previously subordinate to the General Political Department, may have been transferred to the PLA’s new Strategic Support Force (战略支援部队), based on multiple personnel transfers. In practice, this organizational change could prove an operational force multiplier for the three warfares. The creation of the Strategic Support Force, which has integrated space, cyber, electronic and psychological warfare capabilities, enables the PLA to actualize information warfare on the battlefield, while taking advantage of critical synergies among these domains. The ability to leverage cyber capabilities to engage in peacetime influence operations and psychological warfare could prove particularly impactful, as recent Russian efforts have demonstrated. At this point, the future and impact of the three warfares—as well as other integral elements of the PLA’s political warfare apparatus, such as the former GPD Liaison Department—remain to be seen.

Looking forward, the Chinese leadership will continue to advance this systematic strategy for the exercise of discursive power. The CCP’s sophisticated system for “Internet management” defends against “harmful information” that is perceived as the attempts of “hostile foreign forces” to undermine the regime. Although the strength of the state’s coercive institutions might be questioned, the CCP has demonstrated the ability to exercise ever-tighter control over the Internet, while shaping the online information environment through concentrated propaganda. Simultaneously, attempts to exercise discursive power through “telling China’s story” on the global stage have clearly intensified. While this charm offensive has had limited success to date, today’s geopolitical turbulence, especially in the aftermath of the latest U.S. election, may represent an opportunity for China to assert greater influence in reshaping the international system to its own advantage across multiple fronts, as through the One Belt, One Road initiative. The final face of China’s discursive power, that of political warfare, also appears on a trajectory towards greater capabilities, as the PLA seeks to operationalize the three warfares for peacetime and wartime activities alike. In the aggregate, the CCP’s agenda to advance China’s “rejuvenation” could effectively take advantage of these dimensions of discursive power to safeguard its national security, while pursuing expanding strategic interests worldwide.