Why Current Ground Force Numbers Against ISIS Are Insufficient 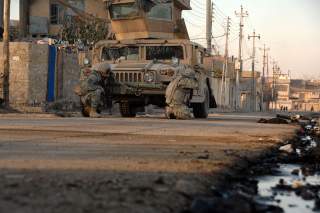 I should feel complimented by Paul Pillar dredging up a piece I wrote for the Washington Post a year ago in his quest to calumny anyone ever recommending use of military force. I had written that, given the impact of ISIS including the threat of more terrorist attacks, the Administration should deploy a small contingent of American ground troops to spearhead offensives against ISIS-held cities. Pillar argues that the Administration in fact has done well against ISIS without U.S. ground troops, even “perhaps going too fast" in taking it down, while my prediction of a new wave of terrorist attacks never occurred. The problem is, his critique doesn't wash.

Agreed, almost three years after ISIS seized Fallujah, it finally is on the defense. Yet it still holds most of Iraq's second largest city, Mosul, with at least weeks of very tough fighting before a possible coalition victory. Meanwhile ISIS appears secure in its Syrian capital, Raqqa, while the United States, according to the Washington Post, cannot identify a local force politically and militarily capable of leading an offensive, exactly the reason for my proposal.

Although the United States has not followed my recommendation on U.S. ground combat formations, Pillar's argument - that the force levels that the Obama administration committed fourteen months ago have proved to be sufficient - is just not correct. Rather, the United States began to succeed against ISIS over the past year largely by shifting to a “lighter” version of the American ground troops idea, now deploying many hundreds of U.S. ground personnel in attack helicopter and artillery units as well as American air control and special forces advisory teams right at the front. Meanwhile, the “access to the Turkish border” that, as Pillar says, ISIS just lost, was due to Turkey in fact deploying, as I’d advocated, “a first class, mobile ground force” - mainly armor - to reinforce local troops against ISIS.

Finally, as to Pillar's assertion of no “paralyzing wave” of terrorist attacks over the past year, how does he view mass casualty ISIS attacks in Brussels, Istanbul and Gaziantep, and ISIS-inspired slaughter in Dhaka and Orlando, plus numerous attacks blocked only by the extraordinary global security mobilization which ISIS's continued existence requires? In fact, the Administration's argument to the Washington Post on why it wants to advance aggressively against Raqqa: forestall anticipated new terrorist attacks.