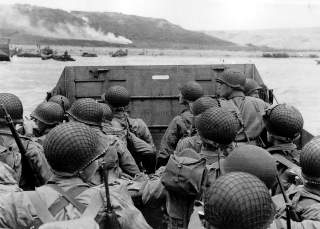 The media is awash with commentary on and analysis of the Normandy landings.  Overwhelmingly, the events of 70 years ago are portrayed as a veritable milestone in world history; a triumph of freedom and democracy over forces of repression and dictatorship.

This is rightly so.  The D-day landings were a decisive turning point in World War II.  They could easily have failed.  If they had, writes Rick Atkinson, the “entire Allied enterprise faced abject collapse.” Hope of victory in World War II would have been postponed if not lost entirely.  It is thus appropriate—and incredibly important—that the landings are remembered for being momentous.

D-day is not the only historical event being commemorated this year.  Next month, the world will remember on its 100th anniversary the outbreak of World War I, another transformative event for Europe and the rest of the world.  In October, the focus will be on Berlin, with the 25th anniversary of the fall of the Berlin Wall providing an occasion to reflect on the collapse of communism in Eastern Europe and the subsequent extension of democracy to most of that region.

For The Guardian newspaper, the end of World War I in 1918, the D-day landings in 1944 and the fall of the Berlin Wall in 1989 are part and parcel of a single historical narrative, one which charts humanity’s trek away from the horrors of World War I towards the “comparative safety and normality” of today.  Through the efforts of leaders and ordinary people alike, the newspaper’s editorial argues, the world has heaved itself away from barbarity towards greater civilization.  From this perspective, the past 100 years has been marked by progress.

There is some truth to this notion that the world is a better and more secure place today than it was in 1914.  Nevertheless, it would be wrong to overstate the case and worse still to assume that there is anything inevitable—or irreversible—about the progress humanity has managed to cobble together over the past century.

Consider China.  This year (indeed, this month) also marks the 25th anniversary of the massacre in Tiananmen Square, when the full force of the Chinese state was used to crush peaceful civilian protestors who were asking for reform.  As Jeremi Suri has written, Tiananmen should be remembered as a critical juncture—a moment at which several different outcomes could have obtained; a crossroads at which multiple futures for China were not only imaginable but actually were possible.

There are many reasons why, in the event, Chinese communism remained robust while Soviet and Soviet-backed communism crumbled.  But at a basic level the difference in outcome simply shows that reform, democratization, peace and stability—what many in the west consider to be hallmarks of human progress—are mercilessly contingent upon power and politics, not just the passage of time.

Tiananmen shows that international history does not unfold according to any given teleology.  Instead, critical junctures like those of 1914, 1944 and 1989 are decided according to prevailing political realities, not least of all the balance of power within (and among) societies. Viewed in this context, D-Day marked a triumph of power: Allied victory on the battlefield led to the demise of Hitler’s murderous regime.  Yet the Allies’ power was not limitless, their success not unbridled: the equally powerful Red Army ensured that totalitarianism persisted for decades in Europe even after Nazism was defeated.  In 1989, new power-political realities would free Eastern Europe but not China.

This first appeared in 2014 and is being reprinted due to reader interest.