Why Did America Stop Building the Best (and Most Dangerous) Submarine Ever? 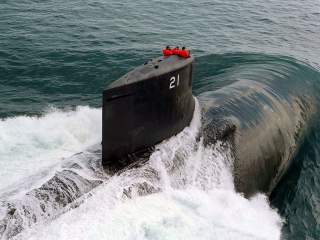 One of the most powerful submarines ever built was cut short not by enemy action but by history and economics. Despite their advanced, world-beating capabilities, only three Seawolf-class submarines were ever built, doomed by the end of the Cold War and escalating costs. Fast, deep diving and bristling with weapons, the U.S. Navy’s Seawolf subs are more relevant than ever in the face of Russian and Chinese naval ambitions.

During the early to mid-1980s, foreign sales to the USSR of advanced milling equipment that made quieter propellers and Moscow’s advances in titanium fabrication allowed the Soviet Union to field quieter, deeper-diving submarines. The Soviet Navy’s Akula-class nuclear attack submarine could dive as deep as two thousand feet, nearly three times deeper than the Los Angeles class.

Clearly the U.S. Navy was going to need a new submarine, and that was the Seawolf. Seawolf could dive deeper, matching the Akula’s deep diving prowess, and its Westinghouse S6W reactor meant it could do thirty-five knots underwater. Each sub could carry an impressive arsenal of up to fifty torpedo tube-launched weapons, including the Mark 48 heavyweight torpedo, Sub-Harpoon antiship missiles and Tomahawk land attack missiles.

The Navy planned to build up to twenty-nine Seawolf submarines—not enough to replace the Los Angeles boats outright but to supplement them in chasing deeper-diving Soviet subs and going after ballistic-missile submarines operating north of the Arctic Circle. In the end, however, just three of the very capable boats were built.

What killed the Seawolf? A lack of money. Between 1988 and 1999, the U.S. defense budget declined from $586 billion to $399 billion dollars. The demise of the Cold War meant widespread cuts across the military services. This so-called “Peace Dividend” was brought on by the dissolution of the Soviet Union and Warsaw Pact, and resulted in military spending diverted to other areas of the federal budget. The defense buildup that started in the second half of the Carter administration and continued under Ronald Reagan was effectively reversed.

Submarines were viewed as weapons vital to big-power warfare, and with the Warsaw Pact and Soviet Union dissolved, there was literally no big-power enemy left to fight. The ships of the Soviet Navy, inherited by a newly impoverished Russia, were mothballed by the hundreds and only a small handful remained operational. The Seawolf’s greatest strengths—ability to dive deep and operate under the polar ice—were suddenly rendered irrelevant by the death of the Soviet Navy. The Chinese navy was still more than a decade from being a serious blue-water navy, and Beijing’s economic miracle was just getting started.

Consequently, the U.S. submarine force experience a crash dive in numbers. The force went from an all-time high of 102 attack submarines in 1987 to just fifty-seven submarines in 1999. This decline wasn’t just limited to submarines, although the sub force was hurt the most—during the same period, the U.S. Navy ship force declined from 594 ships to just 337.

At the same time, cost overruns also doomed the Seawolf. In 1989, the cost for thirty submarines was an estimated $39 billion—a number hard to justify when the Soviet Union was imploding on television.

In the meantime, construction delays stretched out delivery and cost. The Navy’s decision to switch from HY-80 steel used in the Los Angeles and older boats to stronger and more pressure-resistant HY-100 steel created technical problems. In 1991, builder Electric Boat was forced to replace approximately 150,000 pounds of welding material on Seawolf, because existing welding technology was not sufficient to produce durable welds on HY-100 steel.

The weld problem was a serious blow to the Navy and builder Electric Boat, with removing and replacing faulty welds estimated to cost hundreds of millions of dollars and tack an extra twenty-two months on to production. This was exactly what Seawolf didn’t need. Due to the problems with welding and other issues, including developing a new combat system, the first Seawolf was delayed by twenty-five months.

Costs continued to spiral out of control. By 1991, the Navy was looking at a price tag of $33.6 billion for just twelve submarines. By 1995 the Clinton administration and Congress agreed to cap the Seawolf class at just three boats, including the USS Connecticut and USS Jimmy Carter—a specially lengthened submarine that was capable of clandestine underwater operations and special operations. The cost per boat: a whopping $4.4 billion dollars, for a total program cost of $13.2 billion.

Stung by the strung-out and too-expensive Seawolf, the U.S. Navy set to work on a new class of submarines designed to be more flexible, operate closer to shore in support of land operations and—perhaps most importantly—be affordable. With the new Virginia class, the Navy accepted from the outset that it would have to give up some requirements and hold the line on costs. As a result the still highly capable submarines cost $1.76 billion each, less than half as much as Seawolf.

The tale of the Seawolf is the tale of a weapons program faced with extraordinary bad timing. The loss of its primary opponent—the Soviet Navy— begat a loss of funding for submarine construction, with a series of expensive technical headaches thrown into the mix. It was the correct call for the country to stop the number of submarines at three. Still, with with the Chinese navy rapidly expanding and Russia churning out new ballistic-missile submarines, we may soon wish we had more Seawolves, or something like them, very soon.