Why Doesn't Australia Want Japan's Submarines? (Some of Best in the World) 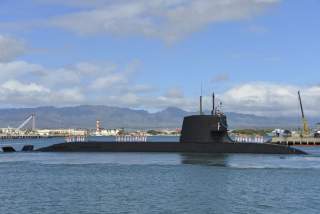 As the dust settles on Japan’s unsuccessful bid to sell its Soryu-class submarines to Australia, Tokyo has a lot to think about. The failure in Canberra was Japan’s second strike in its politically-led push to export its homegrown weaponry.

The joint bid by the Japanese government on behalf of two defense heavyweights — Mitsubishi Heavy Industries and Kawasaki Heavy Industries — lost out to a conventionally-powered variant of France’s Barracuda-class nuclear submarine. Germany was also in the running with its Type 214.

While Tokyo’s hopes of selling Soryus to Australia and P-1 maritime patrol aircraft to the United Kingdom have been dashed, Prime Minister Shinzo Abe’s dream of a healthy defense export market survives— but only if Japan can learn from its failure down under.

The Soryu is a solid, proven platform. The Japanese Maritime Self-Defense Force has operated its fleet of — so far — eight Soryus for seven years now. The boats are a known quantity, but that didn’t really matter. Australia didn’t want an off-the-shelf submarine. Rather, Canberra demanded significant changes to whichever boat it ended up buying — whether French, German or Japanese.

Among some of the changes the future submarine project demanded were a longer service life than Tokyo’s standard 20-year requirement, greater operating range and the integration of equipment and armament than the Collins-class subs already carry.

All three bids required significant changes to the platform. French and German companies, long major players in the global arms market, are accustomed to meeting a prospective customer’s demands. Japan, a new weapons-exporter, is not.

A more transparent Japanese bid might have helped reassure the Australian public that Tokyo was capable of doing the job. Tokyo’s personality-driven, government-to-government sales channel seemed slow to catch up to Australia’s changing political environment.

French shipbuilder DCNS outflanked the Japanese bid by responding to Australia’s needs and engaging the media. Tokyo and Canberra largely kept the Soryu offer under wraps, creating the impression of underhandedness and aloofness.

This may not have sunk their bid in the eyes of Australian officials whose main concerns were cost and capability, but Tokyo’s poor media-relations certainly made the Japanese sub option less politically viable.

Japan’s bid in the Project Sea 1000 Future Submarine program owes much to a burgeoning Australian-Japanese strategic relationship founded upon their mutually strong ties to the United States and their shared concern over China’s regional ambitions.

Prime Minister Abe’s government lifted a longstanding post-war ban on defense exports in April 2014. This is part of his larger political campaign to reorient Japan as a “proactive contributor to peace” —his euphemistic rebranding of a post-Gulf War trend that has seen increasing Japan contributions towards international security at an appropriate commensurate with its position as a leading political and economic power.

For the government, this translates into lower purchase and lifetime costs, better equipment and healthier competitive bids.

In July 2014, Abe visited Canberra to sign an defense science and technology agreement with his Australian counterpart, Prime Minister Tony Abbott. The two leaders announced that their national defense research bodies would cooperate in the areas of marine hydrodynamics.

But Abe did little to hide the direction of this research. “Technology derived from this field of research can be applied to a wide range of vessels, including submarines,” Abe told The Australian.

In the month before Abe’s visit down under, Australian defense minister David Johnston became the first foreign minister to inspect a Soryu submarine — Zuiryu, then in port at Yokosuka. In May 2014, Johnston had called the Soryu “the best conventional submarine in the world.”

Johnston emphasized that the Australians were looking at European platforms, too. But by September 2014 — following visits by Japanese government and defense industry officials — Australian newspapers reported that a deal worth between $15 and $20 billion was imminent.

But despite the blossoming special relationship and media speculation, Japan’s reported deal would ultimately prove unpalatable to the Australian public.

With countless gaffes, a propensity for fear-mongering and a budget that broke many of his party’s campaign promises, Abbott and his cabinet began losing the support of the public and businesses.

Real or not, a secret submarine deal between Japan and Australia became a political noose that Abbott had to escape.

One of the most contentious issues was whether Japan would let the Australian Submarine Corporation in Adelaide construct the Soryudomestically. Opposition party critics pointed to a pre-election vow by defense minister Johnston to “deliver those submarines from right here at ASC in South Australia.”

But in November 2014, Johnston publicly ridiculed the same shipbuilder for delays and budget-overruns on the three Air Warfare Destroyers it was building. “I wouldn’t trust them to build a canoe,” Johnston remarked. This was political suicide and Abbott replaced him in a December cabinet reshuffle.

Japan’s perceived unwillingness to transfer some secrets — such as Kawasaki’s new lithium-ion batteries — and to allow Australia to build its own submarines was a consistent impediment to Tokyo’s ongoing bid. But in February 2015, Abbott forced Japan’s hand with the announcement of a “competitive evaluation process.”

The Australian prime minister was in the midst of a spill motion that threatened to oust him from power. To survive, he needed to make the submarine project more transparent. He promised an “open and competitive tender process.” But the new “competitive evaluation process” smacked of political obfuscation.

Japanese officials seemed confused, as did many of the projects Australian stakeholders.

Now in direct competition with experienced French and German defense companies, the Japanese government had been thrown into the deep end. Public opinion was turning against it.

Tokyo should have immediately sent government and industry officials to Australia to repair its public relations and prepare a competitive bid that could meet Australian needs. But by the time the three final proposals arrived at the Australian department of defense in December, Japan looked like it was struggling to keep up.

In September, Malcolm Turnbull ousted Abbott to become leader of the Liberal Party and thus prime minister. Japan lost its closest ally in Canberra, and Turnbull’s apparent willingness to court China prompted media fears of a thaw in the new Australian-Japanese special relationship.

Meanwhile, Tokyo remained largely mum about the specifics of its submarine offer.

By September, 70 percent seemed to be the magic ratio for construction in Australia. First raised by the French DCNS chief executive Sean Costello as a lower estimate for the amount of onshore construction its bid could offer, this figure was then backed up by then-defense minister Kevin Andrews in parliament. “That means we’re going to have more jobs, a significant part of that build, perhaps 70 to 80 percent of submarines built here in Australia.”

Despite the evaluation process requiring three plans from each party — entirely built abroad, entirely built domestically and a hybrid of the two — the lesson of Abbott’s fall had shown that an offshore build would be politically unsustainable.

Both DCNS and Germany’s ThyssenKrupp Marine Systems had experience with hybrid and offshore builds, but Japan had no such experience — at least not as a manufacturer. Japan was also the only bidding party that hadn’t publicly stated how much of the project it could offer Australia’s shipbuilders.

Japanese officials frequently emphasized the substantial additional costs an Australian construction process would require, but both its French and German competitors denied this would be the case.

But Australia’s concerns were exactly what Tokyo itself frequently requires during its own tenders. Domestic builds are essential for maintaining a capable national defense industry. Tokyo understood what Canberra wanted, but instead emphasized its offer as a strategic partnership between the two nations — as though the new special relationship were contingent on Canberra selecting the Soryu.

Pretending that the Soryu was the strategically correct choice is simply wrong. Make no mistake — Tokyo and Canberra are militarily, politically and economically tied bilaterally and through their alliances with the United States. But it is clear that the government-led bid was to the detriment of Japan’s public standing in Australia.

f Tokyo had given Mitsubishi the ability make Japan’s bid as a commercial interest during the competitive evaluation process, there might have been a different outcome. As a company, Mitsubishi would have been able to speak in more detail about its offer to Canberra. It could have attended the public hearing in Glenelg where some South Australians took Japan’s absence as a snub to their desires for a domestic build.

When Mitsubishi president Shunichi Miyanaga visited Adelaide in February 2016, his was the most charismatic and responsive of Japan’s official visits. He spoke clearly and decisively where no one else had. DCNS and ThyssenKrupp had been doing the same thing for months, but it took Japan far too long to understand that the sale was not just to the Australian government, but to the Australian public as well.