Why Donald Trump is the U.S. Army’s Once in A Lifetime Opportunity 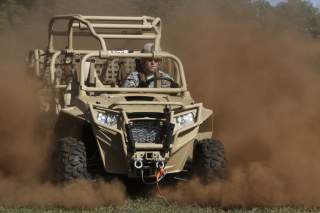 The stars may be aligning in favor of the U.S. Army. There is a recognition in all quarters – Congress, the military, the American people and even President-elect Trump’s nominees for national security cabinet posts – that the United States faces a range of serious security threats, foremost among them Russia. This leads, naturally, to the need for a U.S. military capable of fighting and prevailing in high-end, high-tech conventional conflicts. There is growing concern among these same stakeholders that the U.S. military is in danger of being outpaced technologically by some of these adversaries. There is a realization that the Army is the service that has suffered the most due to fifteen years of war and declining defense budgets. There is a growing appetite in Congress for an increase in defense spending with a particular focus on the Army. Finally, the Army has a series of “shovel ready” modernization programs that could be jump-started once resources are available.

No military service has been more challenged by circumstances and crises, some self-inflicted, than the Army. Over the past two decades, the Army has experienced serial failure of all its major modernization programs, a massive influx of procurement funding that went to capabilities largely useful for only one type of conflict, relatively rapid and large scale fluctuations in end strength, organizational changes that may actually have reduced combat power and the general drift in U.S. defense strategy. The result is an Army that is in danger of becoming obsolete, having given up a number of capabilities central to modern, high end warfare, is too small to meet current demands not to mention the requirements for major conflicts and lacks focus.

Chief of Staff of the Army, General Mark Milley recognizes these problems. He has identified Russia as the leading near-term military challenge confronting the United States.  General Milley has pressed to bring U.S. heavy forces back to Europe. He has been clear about the urgent need to address critical capability gaps. Just yesterday, the Chief identified his modernization priorities as air defense, aviation, long-range fires, ground vehicles for light forces and cyber/electronic warfare.  In most of these areas, the U.S. Army was once a leader, but gave up its capabilities as defense budgets declined and new threats required different forces.

This is a good start. There is no question that the U.S. Army needs to reacquire its lost capabilities. But this is insufficient.  It is highly unlikely that even with these fixes the Army can make good on the promise General Milley made last October at the AUSA annual meeting. “I want to be clear to those that wish to do us harm. I want be clear to those around the world who want to destroy our way of life and those of our friends and allies. The US military, despite all our challenges, will stop you, and we will beat you harder than you have ever been beaten before.” This will be a tall order vis-à-vis a Russian or Chinese military that has been prepared for a decade or more to counter U.S. military advantages and has forces with more modern equipment. At that time the Army was focused like the proverbial laser beam on fighting counter-insurgencies.

Bluntly stated, the Army is the service least prepared for modern high-end conflict. This is true across the board with respect to systems, organization, training, education and even attitude. This is a problem that has developed over a long period, decades really. It will take time and resources to fix.

Fortunately, the Army has a set of truly “shovel ready” modernization programs that can be accelerated almost immediately upon the receipt of additional resources. There is the Stryker lethality program, which could up gun and provide added protection for all the Stryker brigades.   The Abrams tank and Bradley fighting vehicles have major upgrades underway, but at an excruciatingly slow pace due to funding limitations. The same is true for the Paladin mobile gun system, ATACMS and MLRS rocket systems, Apache and Black Hawk helicopters and tactical communications.  Accelerating these programs will significantly enhance the fighting capability of the U.S. Army in the near-term, send a strong signal to our adversaries, throw a lifeline to a part of the defense industrial base that has been slowly withering away, and set the stage for what must come next in terms of a new generation of ground combat vehicles, long-range precision fires, electronic warfare systems, aviation platforms and robots.

This is a once in a lifetime opportunity. The Chief of Staff needs to lay out his modernization strategy, including resource requirements, with a focus on what can be done in the near term  and how he will then transition to a truly transformational modernization program. Congress is hungry for such a strategy. The new Trump Administration will need it.

The big question is whether General Milley is prepared to be the Chief of Staff who transforms the U.S. Army into a force capable of dealing with the threats of the 21st Century. To do this he needs to articulate a strategic vision for the Army – one that will drive changes to end strength, force structure, operating concepts, organization, procurement, doctrine, training and soldier education. In essence, he needs to tell his organization and the rest of us why we will need an Army in the future, what it will do for national security and, most importantly, how it will fight future conflicts with high-end adversaries.

He needs to do it quickly. The FY2019 defense budget, the first that will truly be Trump’s, is going to be built by this summer. If the Army is going to be transformed, this is the place it will start.