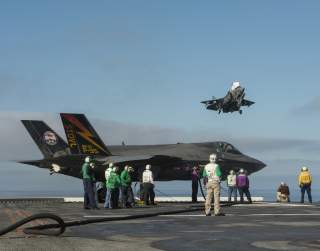 On Dec. 12, 2016, president-elect Donald Trump asserted that F-35 unit cost was “out of control” through his preferred medium Twitter. On Dec. 19, 2016, U.S. Air Force Lt. Gen. Chris Bogdan, in charge of the Joint Strike Fighter project, gave the press his version of things.

Multiple media outlets passed along the officer’s comments, but with no analysis of the completeness and accuracy of Bogdan’s assertions. The reports offered no context or alternative views on the stealth fighter’s actual cost per plane.

Bogdan got these numbers from the funds Congress set aside in the 2015 defense budget for what the Pentagon called “Lot 9,” just one of a number of planned F-35 purchases. In November 2016, the U.S. military was still negotiating the final deal with plane-maker Lockheed Martin.

Needless to say, the unit costs Bogdan gave the media were incomplete. They involve only the Pentagon’s existing contracts with Lockheed and engine-maker Pratt & Whitney to build the airframes and jet motors.

The numbers do not, for example, include the cost to buy maintenance equipment and other necessary support elements. They do not include money the Pentagon will spend to fix design errors discovered in testing now and in the future.

These figures are not the “sticker price.”

One could calculate a far more complete price from the appropriations that Bogdan told Congress he needed to buy functioning airplanes. The difference between what he is telling the press now and what he told Congress in 2015 is significant — it is also the difference between a factory simply putting together a airplane and delivering an airplane that can actually fly and operate.

For the 2015 fiscal year, the F-35 project chief petitioned Congress for $6.4 billion to produce 34 F-35s for the Air Force, Marine Corps and Navy. This amount did not included separate funds for research and development and other costs that the Pentagon asked for in budget request.

Put another way, in 2017, a F-35A costs about twice what the Pentagon promised Congress more than two decades earlier. Compared to this initial estimate, the F-35B costs more than twice as much now, while an F-35C is about four times more expensive.

I suspect Trump can recognize when he is being scammed. In this case, the Pentagon is telling him American taxpayers can get F-35s for only two to four times what they originally advertised.

This story originally appeared in War is Boring