Why on Earth Would Russia Attack the Baltics? 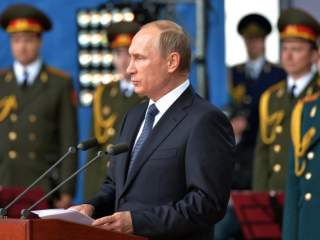 When the Cold War closed many people believed that history had ended. Peace had descended upon the earth. The lion was about to lie down with the lamb. The Second Coming seemed on its way. Europe was certain to be free and undivided.

Alas, it hasn’t worked out that way. But no worries. At least NATO officials are happy. Following Russian intervention in Georgia and Ukraine the alliance rediscovered a sense of purpose through its old enemy, Moscow. The Obama administration just announced a multi-billion dollar program to bolster U.S. forces in Eastern Europe. Now a Rand Corporation report warning that Russia could easily overrun the three Baltic members of NATO is raising additional alarm.

Said David A. Shlapak and Michael W. Johnson: the “unambiguous” result of a series of war games was that “As currently postured, NATO cannot successfully defend the territory of its most exposed members.” Russia’s forces took at most 60 hours to reach the Estonian and Latvian capitals. Such an invasion would leave the alliance only with bad options:

“a bloody counteroffensive, fraught with escalatory risk, to liberate the Baltics; to escalate itself, as it threatened to do to avert defeat during the Cold War; or to concede at least temporary defeat, with uncertain but predictably disastrous consequences for the Alliance and, not incidentally, the people of the Baltics.”

The Rand researchers recommended a substantial allied—which, in practice, means U.S.—military presence. Seven brigades, three armored, would “prevent the rapid overrun of the Baltic states.” This would prevent Moscow from, as the report says,

“being able to confront NATO with a stunning coup de main that cornered it as described above, an attack on the Baltics would instead trigger a prolonged and serious war between Russia and a materially far wealthier and more powerful coalition, a war Moscow must fear it would be likely to lose.”

Shalapak and Johnson dismissed the cost, estimated at around $2.7 billion, but more commitments require more force structure, and that burden almost certainly would fall upon America rather than the Europeans. Just like the administration’s new initiative for Eastern Europe involving a single brigade. Nevertheless, argued the report’s authors, better to deter than invite “a devastating war.”

Their conclusion illustrates the folly years ago of treating NATO as a social club and inducting new members which were irrelevant to the continent’s security and possessed minimal military capabilities. At the time, Russia was too weak to make much of a fuss and U.S. officials assumed that mere words would suffice to defend those inducted. NATO expansion was considered a great success. But now the alliance realizes that it is obligated to war against nuclear-armed Russia on behalf of three essentially indefensible countries.

Equally striking is how NATO membership has discouraged the Baltic nations from doing much for their own defense. After the administration announced its plans for the new rotating brigade, Roman Kuzniar of the University of Warsaw said “It is clear that the European Union can no longer adequately respond to Russia’s demonstrations of power, so it is comforting that at least the United States is finally stepping up.” Actually, the problem is not that the EU cannot, but that it will not, step up. In contrast, the United States has been stepping up for more than six decades.

The three Baltics never hesitate to insist that they at great risk, but they spend little on their militaries. Despite recent outlay increases, only Estonia spends more than $200 per capita. Last year Latvia and Lithuania devoted 1.06 percent and 1.14 percent, respectively, of GDP to the military. Estonia was 2.04 percent—the first time Tallinn met the official NATO standard.

No one believes the Baltic states are capable of defeating their large neighbor in a full-scale war. But if they truly believe themselves to be at risk they should spend sacrificially to create a military capable of inflicting substantial pain on any invader. Being ill-prepared militarily is the most important invitation to a Russian attack.

Yet the surging fear over Russian adventurism distorts Moscow’s interests and ambitions. Vladimir Putin is a nasty fellow, brutal at home and abroad. However, he seems to well represent much of his country’s power elite and public. There is little apparent support for Western-style liberalism. Oust Putin and “le deluge” to follow would not likely be pretty.

Putin’s behavior is bad, but poses little threat to America, “old” Europe or even most of Russia’s neighbors. He is behaving like a traditional Tsar, not a reincarnated Joseph Stalin or Adolf Hitler. He has taken Moscow back to the Russian Empire, not the Soviet Union. His government is not interested in an ideological crusade and sees no inherent conflict with the West. Rather, Moscow demands respect for its status, protection of Russia’s borders and consideration of its interests. In pursuing these ends Putin is practical and measured, if perhaps imprudent and myopic—and, of course, dismissive of the cost to others.

Mikhail Saakashvili’s Georgia was actively anti-Russian, pursued close ties with America and sought membership in NATO—all certain to antagonize Moscow. Abkhazia and South Ossetia had resisted Georgian control in the past, giving Russia an easy means to weaken Tbilisi and pay back NATO over the latter’s dismemberment of Serbia, with historic ties to Moscow. (Russia’s defense of Belgrade helped turn an assassination into World War I.)

Ukraine always mattered more to Moscow than Georgia or the Baltics for historical and cultural reasons, as well as the naval base of Sebastopol. Nevertheless, Russia accepted an independent Ukraine, even when ruled by the hostile, incompetent Viktor Yushchenko, who also pushed for his nation’s membership in the alliance—then opposed by the majority of Ukrainians. Yushchenko’s failure opened the way for the election of Viktor Yanukovich, nominally pro-Russian, though he resisted Moscow’s control. Putin acted only after Europe pushed a trade agreement to reorient Ukraine away from Russia and both Brussels and Washington backed a street revolution against Yanukovich.

Even then, Putin sought to weaken, not conquer, Ukraine. He seized Crimea, historically part of Russia, and backed ethnic Russian separatists in the east. Despite numerous predictions, Moscow did not absorb the Donbass, create a land bridge to Crimea, stage a coup de main against Kiev or launch a general assault on Ukraine. His brutal response was murderous and unjustified, but militarily on par with U.S. interventions.

Putin continues to demonstrate no interest in ruling those likely to resist Russia’s tender mercies. Ukrainians and Georgians would not likely act like docile Russian citizens today. Indeed, the former resisted the restoration of Soviet control after German forces were expelled in World War II. Nor was occupation necessary to bar those nations’ way to NATO.

Seizing the Baltic states likely would generate similar resistance. They developed separate identities under the Russian Empire and enjoyed brief independence between World Wars I and II. They also have the advantage of having joined NATO before Moscow could cause much trouble.

Finally, the Baltic ethnic Russian populations, though significant, demonstrate little sentiment for joining Mother Russia. They prefer cultural connection to political affiliation, creating a poor target for the sort of destabilizing tactics deployed against Ukraine. Wrote Robert Person, a professor at West Point: “the Baltic Russians are not particularly amenable to Russian hybrid warfare. Though they have many lingering grievances over language, cultural and citizenship policies, these grievances have not translated into separatism.”

So what would Russia gain from attacking the Baltics? A recalcitrant, majority non-ethnic Russian population. A possible temporary nationalist surge at home. A likely short-lived victory over the West.

The costs would be far greater. Grabbing the Baltics likely would spur population exodus and trigger economic collapse. Launching a war without the convincing pretext present in the cases of Georgia and Ukraine might leave the Russian public angry over the retaliation certain to come. Worse, Moscow certainly would rupture economic and political relations with the United States and Europe and probably start a losing conventional war with NATO. Even more frightening would be the prospect of a nuclear conflict, whether intentional or inadvertent.

Russia has destroyed Europe’s peaceful equilibrium, but everything about Putin’s presidency so far argues against reckless war for no rational purpose against the Baltics. Of course, they should act to reduce even minimal chances of such a war. However, Washington should not launch a multi-billion dollar allied build-up, one which, ironically, would create a perceived threat to Russia where none currently exists.

Could NATO lose a war over the Baltics? As Rand warned, yes, at least in the short-term. But the allies could defeat Russia if they were prepared for World War III. That would be beyond foolish for Washington—another reason why the United States should stop making defense promises which serve the interests of other nations rather than America. If the Europeans, in contrast, are ready to make that commitment, they should be preparing their own defense.