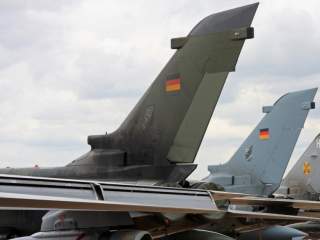 Germany’s air force is in bad shape. For years, its fighter planes have fallen into disrepair due to lack of spare parts, with the number of its flyable, operational warplanes now at one of its lowest points.

That bodes ill as Berlin considers deploying its Tornado multi-role fighters for operations in Syria in a reconnaissance role. The German parliament is expected to approve a decision—days after Britain authorized air strikes on Syria—on Friday. Germany already supplies weapons and training to Kurdish peshmerga fighters.

Berlin should have enough fighters to deploy to the region to meet the mandate, as the German defense ministry only wants to send six Tornados. But the situation . . . is not good.

In other words, Germany has jets, jets it could fly and jets it can fly. Keeping track of each is standard practice for every air force.

Take the Eurofighter Typhoon. The twin-engine, canard-delta wing fighter is Germany’s most modern warplane, of which it owns 109 in three different variants. Seventy-four were available but only 42 were deployable in 2014, according a German air force report obtained by Der Spiegel.

Now look at Germany’s other fighter, the 1970s-era, variable-sweep wing Panavia Tornado—designed to speed past air defenses during the Cold War.

In total, Germany owned 89 Tornados, had 66 available and 38 deployable in 2014. That means less than half of Berlin’s fighter fleet is reliable in a war.

But it’s worse than that—and even these numbers are misleading. Germany’s ministry of defense does not “distinguish between ‘full’ or ‘conditional’ operational capability,” Der Spiegel noted last year. When only counting the fully operational Typhoons, the number drops . . . to eight.

The number of deployable Tornados fell further in 2015 to 30. So that’s 38 deployable fighters out of an inventory of 198.

Robert Beckhusen is managing editor of War is Boring, where this article first appeared.