Why Germany's New Super Stealth Submarines Could Take on Any Navy 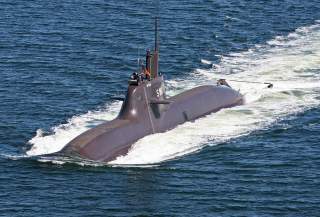 The Type 212’s double hull displaces 1,800 tons submerged, and is made of nonmagnetic materials so that it is not susceptible to detection by magnetic anomaly detectors. The softer metal limits the operational depth to just two hundred meters, but this is not a major limitation in shallow Baltic waters. The Type 212’s fuel cells, with hydrogen fuel stored in between the outer and inner pressure hulls, allow it to sail underwater for three weeks before surfacing. Reportedly, a Type 212A set an underwater endurance record for conventionally powered submarines in 2013 by transiting eighteen days submerged without use of its snorkel. While the Type 212 can achieve underwater speeds of up to twenty-three miles per hour, its sustainable cruising speed is closer to nine miles per hour while using just the AIP system.