Why Hiring Former Terrorists Is a Good Idea 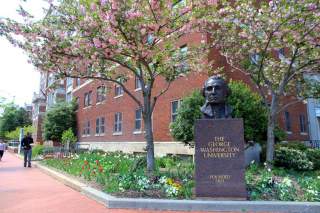 Recently, George Washington University was the subject of many sensationalist headlines when its Center for Cyber and Homeland Security announced that it had hired former Al Qaeda recruiter Jesse Morton to work for its nascent Program on Extremism. While it may indeed be newsworthy that a former terrorist is now employed at a prestigious university (where, it should be noted, he will not teach), it should not be a matter of scandalous intrigue. In fact, the move should be lauded as a prescient one—a step in the right direction for the development of counterterrorism policy.

Though some of the reporting on his hiring acknowledged Mr. Morton’s unique perspective, very few articles (if any) engaged with the nuanced reasoning behind his employment and its potential benefits. Morton’s experience in the realm of Islamist extremism in general and Al Qaeda in particular makes him uniquely qualified to research radicalization and violent extremism. His immersion in the virtual and physical networks that support organizations like Al Qaeda and Islamic State allows him to understand how those groups target, recruit and train individuals, as well as how they are likely to evolve in response to new policy and the rapid advance of technology.

This is not to say that there aren’t legitimate security questions and moral concerns which arise when considering Morton’s background. Given the threat posed by his former organization and the threats he issued while a member, there cannot be any room to doubt the comprehensiveness of Morton’s repentance and reformation. Mr. Morton’s employment also raises questions about the efficacy of long prison sentences for terrorism convictions (he served roughly three years of his eleven-year sentence, securing early release after deradicalizing and cooperating with the FBI) and whether radicalized converts like him should be left in an environment where Islamist radicalism often flourishes. While debates on those issues will no doubt continue, Morton’s contributions to radicalization research may validate his early release from prison and provide a valuable case study in employing former extremists.

While Mr. Morton’s appointment marks the first hire of an individual of his background for this purpose in the United States, the idea of hiring a former extremist to work against current extremists is hardly new. Alphabet think tank Jigsaw (formerly Google Ideas) has been working on countering violent extremism and radicalization since at least 2011, when it gathered eighty former extremists from Islamist extremists to neo-Nazis at a summit in Dublin to discuss the draw of extremism, vulnerable demographic groups and technology’s potential to assist in the deradicalization process. Three years before that, two former Islamist extremists founded Quilliam, a London-based think tank devoted to countering Islamist extremism, a first of its kind. In Norway, former extremists are working to engage and deradicalize youths who are being recruited by Islamic State and other jihadist groups.

The U.S. government is behind the curve when it comes to the radicalization process as a driver of terrorism. The efficiency with which Islamic State has been able to radicalize, recruit and inspire individuals to commit terror attacks in its name has only recently prompted the government to begin attempting to address the root causes of terrorism. Until this point, U.S. counterterrorism strategy has largely relied on a distending security apparatus designed to prevent attacks in the planning or pre-execution stage. However, the proliferation of credible threats has made it abundantly clear that, no matter how many people they employ or how sophisticated their technology, government security agencies cannot stop every attack.

Hence the government’s newfound development of programs aimed at countering violent extremism (CVE). These programs, which aim to “address the root causes of violent extremism by providing resources to communities to build and sustain local prevention efforts and promote the use of counter-narratives to confront violent extremist messaging online,” represent the next evolution in counterterrorism strategy. If successful, they will hopefully steer vulnerable individuals away from the path of radicalization, long before they have begun plotting a terror attack or fundraising for a terrorist group. Given that Department of Homeland Security (DHS) grant funding for CVE research was only announced a couple of months ago, it will likely be a long time before the efficacy of this effort can be properly evaluated. For the time being, this initiative represents a welcome alternative to the government’s ineffective propaganda war against Islamic State, which does nothing to address the roots of its extremist support.

Ideally, private organizations like GW’s Center for Cyber and Homeland Security and other think tanks will capitalize on the funding offered by the DHS grant to hire more individuals like Mr. Morton. These organizations’ positions as nongovernmental entities allow them to hire former extremists for counter-extremism and -radicalization research whom, for obvious reasons, the federal government cannot employ. The diversity of individuals’ backgrounds in groups like Islamic State and the uniqueness of radicalization paths means that effective counter-extremism research will require a similar diversity of backgrounds, particularly in those who can best relate to the target populations. Voices like Mr. Morton’s will be a valuable addition to ongoing academic debates on how best to improve deradicalization and prevention programs as they begin to be used more frequently here in the United States.

Kevin Reagan is a research assistant in foreign and defense policy at the American Enterprise Institute.