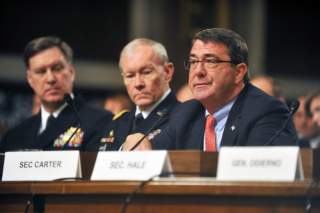 After a week of swirling rumors, Ashton Carter, the deputy defense secretary from 2011-2013, has been all-but-announced as President Barack Obama's nominee for secretary of defence.

Although Carter now needs to get confirmed, and will face particularly strong grilling on his views on US strategy in Iraq and Syria, it looks as though his confirmation will be a great deal smoother than Hagel's tortuous process: Carl Levin, chair of the Senate Armed Services Committee, has said “he would be a great choice,” and Levin's successor come January, John McCain, has expressed approval.

Why all the optimism?

Carter has a longstanding interest in India. In 2006 he wrote a long and nuanced essay in Foreign Affairs on the much-maligned US-India civil nuclear deal, arguing that, though it was unbalanced and problematic, it was worth pursuing for the sake of a “strategic realignment.” Then in 2011 Carter was appointed deputy secretary of defense. Ajai Shukla argued that, in this role, Carter was responsible for “bulldozing the Washington bureaucracy into moderating its hands-off attitude to India,” pushing forward the Defense Trade and Technology Initiative (DTI, a body designed to help smooth the flow of advanced American technology to India), and proposing the unprecedented co-manufacture and even co-development of key weapons systems. Even though India has been steadily buying US arms, there seemed to be something sluggish about US-India ties. Carter looked like a bright spot in those lean years.

In an article for Foreign Policy in November last year, as he came to the end of his tenure, Carter emphasised “DoD's decision to change its mindset regarding technology transfer to India from a culture of ‘presumptive no’ to one of ‘presumptive yes.’” Carter framed this change in the context of the US rebalancing to Asia, but also within Asia – from “existing partnerships in Northeast Asia” to “new bilateral and multilateral collaboration in Southeast Asia and elsewhere.”

Two months before he wrote that, Carter had suggested, on a September 2013 visit to India, that Delhi and Washington co-develop the next-generation version of the Javelin anti-tank missile, something that he underscored was “an entirely new proposal intended to reflect the DTI, and it's being offered to no other country but India.” This was a potentially far-reaching proposal, and it seems fair to assume Carter was the animating force behind it. But India stalled, and recently, to Washington's great disappointment, opted for a large purchase of Israeli Spike anti-tank missiles over the existing Javelin.

However, co-development isn't off the table yet. According to Indian press reporting on Monday, India's defense research organisation, DRDO, and the defence ministry have shortlisted five possible areas for cooperation: naval guns, mine scattering anti-tank vehicles, unmanned aerial surveillance system, Javelin missiles, and aircraft landing systems for carriers. Apropos the carriers, the hints have been there: September's Modi-Obama joint statement alluded to “enhancing technology partnerships for India's Navy,” and the plugged-in Ashley Tellis had in September urged “US decisions to partner with New Delhi on developing India's next-generation aircraft carrier.”

As defense secretary, Carter will have a lot more on his plate than India, of course. US strategy against ISIL is in flux (one factor in Hagel's departure), Russia continues its brinksmanship with Europe, and China is challenging the pivot. The Pentagon is also in a bruising budgetary clash with Congress, with so-called sequestration mandating automatic cuts that could mean the US defense budget shrinks by “almost a trillion dollars by 2021.” And, as Carter himself wrote in Foreign Affairs earlier this year, “the Pentagon is ill equipped to address urgent needs that arise during wartime’ – making the procurement system more flexible and adaptive will be a priority.

Carter will also have to overcome serious obstacles in Delhi, including India's longstanding refusal to sign the so-called Communications Interoperability and Security Memorandum of Agreement (CISMOA) and Logistics Support Agreement (LSA), two agreements that US law deems necessary for certain aspects of technology transfer. For instance, Iskander Rehman recently explained how India's rejection of CISMOA and another protocol, the Basic Exchange and Cooperation Agreement for Geospatial Cooperation (BECA), meant that the sophisticated P-8I Poseidon maritime surveillance aircraft purchased by India were “delivered without secure and encrypted communications, and satellite navigational aids.”

But with Obama and Modi having established a personal connection, a new Indian defense minister now in place, and other arms suppliers – not least France and Israel – making progress in Delhi, the time is ripe for Carter, from a higher perch, to give a fresh push to the proposals he set in motion last year.