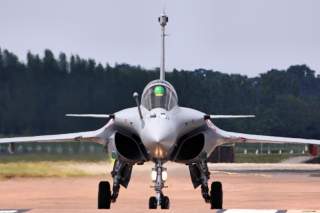 India is on the verge of signing a deal with France for 36 Dassault Rafale fighter jets, likely when French defense minister Jean-Yves le Drian arrives in New Delhi later this week.

The jets may end up lugging nuclear bombs, as officials told The Indian Express this month that the jets are “to be used as an airborne strategic delivery system.”

That’s a polite way of saying India’s jets could drop nukes — one mission which Dassault specifically designed the multi-role Rafale to do. There’s also precedent here, as France previously sold and supplied spare parts for India’s Mirage 2000s, which are the most important delivery platform for New Delhi’s nuclear weapons.

“We expect the same degree of cooperation from France when we modify and use the Rafales for that role,” a second military official told the Express.

But if you’re from Pakistan or China and you’re worried — don’t sweat. Thirty-six Rafales are not enough to give India an advantage over its nuclear-armed neighbors. India’s upcoming ballistic missiles pack significantly greater range and are far more difficult to stop.

The United States imposed sanctions on both countries, but France didn’t.

India weaponizing its nukes proved to be a different story, largely owing to extreme secrecy and compartmentalization within the government and military. Since the Indian Air Force barely knew the specifications of the country’s nukes, it could hardly design appropriate delivery systems.

India had no experience mating nuclear warheads to ballistic missiles, and its launchers in the 1990s were either too slow to fire — veritable suicide during a nuclear war — or too unreliable to depend upon.

This left India’s 1970s-era Mirage 2000s to take on much of the job. But the warheads were an awkward fit, and only highly skilled pilots could take off with the cumbersome payloads attached underneath their planes’ bellies — making the jets aerodynamically tricky to fly.

Nor did Dassault initially design the Mirage 2000 with nuclear weapons in mind. As a result, the Indian Air Force feared its planes’ fly-by-wire systems could be knocked out by the electromagnetic pulses from the detonating bombs.

“In the early 1990s, the air force was thinking of one-way missions,” a senior Indian Air Force officer told the Atlantic Council’s Guarav Kampani writing in International Security. [I]t was unlikely that the pilot deployed on a nuclear attack mission would have made it back.”

“The modification of aircraft for safe and reliable delivery of a nuclear weapon turned out to be a huge technical and managerial challenge that consumed the [state-owned Defense Research and Development Organization’s] attention for six years and perhaps more,” Kampani wrote.

“There was a major problem integrating the nuclear weapon with the Mirage.”

India has come a long way since. It has upgraded its Mirages, possesses up to 120 nuclear warheads, has completed its first ballistic missile submarine and has three different (and more modern) kinds of Agni ballistic missile launchers already deployed, with longer-range iterations on the way.

But the submarine Arihant is more of a test-bed than a credible weapon system. India’s land-based launchers lack rigorous testing regimens and still suffer from reliability issues. The most advanced operational launcher, the Agni-3, numbers fewer than 10 in service, according to the Federation of American Scientists.

Most Indian launchers are older Prithvis, which are short range and slow to prepare. New Delhi does not possess MIRVs — devastating clusters of nuclear warheads which ride together aboard a single missile, break apart and rain down on their targets. Nor is it likely that India has the will or expertise to develop them.

But you can see why India prefers aircraft. They’re technologically simple compared to missiles, can be recalled and are highly visible to an adversary, creating a deterrent effect. That’s good for keeping the peace, but during a war, they’re more easily spotted and shot down.

And the same is true for the canard delta wing Rafale. To be sure, the plane has a longer range, a lot more thrust and a greater payload capacity than the older Mirage 2000.

So the planes — specifically designed with nuclear weapons in mind — will give India a modestly more effective strike force than the aging one it has now.

But regardless, India will only buy … 36 Rafales. That’s just two squadrons, and far below the 126 fighters planned several years ago. (That deal collapsed.) So the nuclear competition with Pakistan won’t change because of the jets.

What would change it? Commissioning more ballistic missile submarines, building longer-ranged missile launchers and ramping up production of fissile material which could produce more and more powerful bombs … all of which India is doing.