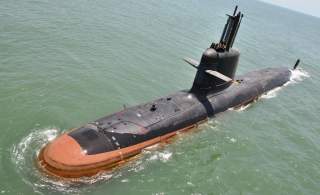 The program is running four years behind schedule and its original contract cost of US$2.63 billion has spiralled to US$3.8 billion. Apart from raising national security concerns, the leak also raises questions about the motives of the newspaper in exposing a friendly nation’s defense agenda.

In April, Australia awarded DCNS an AU$50 billion (US$38 billion) contract to design and build 12 next generation submarines. There has been speculation that the exposé could have been the consequence of corporate espionage, as competition is fierce in global military sweepstakes.

The uploaded set of documents contained the entire design plans, specifications and stealth capabilities of the Scorpene, including its underwater warfare system. A range of technical specifications of the sonars and at what degrees and frequencies they could function were also revealed.

Indian authorities downplayed the incident, stating that it did not compromise national security, as such information was available on ‘many naval defence websites’, and that The Australian blacked out vital factors. They also viewed the issue as a temporary setback and contended that the leaked documents were largely made up of generic data and information that was dated back to 2011 and has since been modified.

But while it is not unusual for parameters to be altered at the behest of customers, the comprehensive disclosure by The Australian undoubtedly divulges confidential information to rival companies and navies.

Though he termed the leak as one of ‘concern’, Australian Prime Minister Malcolm Turnbull did not refer to the damage it might cause India’s defenses or even The Australian’s culpability in this regard. Instead, he specified that the Indian Scorpene was a different model from the one Australia was buying.

India has taken up the matter with France’s Director General of Armament, requesting an urgent investigation and that the findings are shared with India. The matter is also being pursued with other concerned governments through diplomatic channels to verify the authenticity of the report.

The French contractor is understandably perturbed. Days after the leak the Indian government rejected its 100 per cent foreign direct investment proposal that was submitted in May 2016 for producing Air-Independent Propulsion (AIP) technology to be deployed on all future submarines in the country. The lack of an AIP is a major deficiency in the Scorpene program. This marine propulsion technology vastly enhances the endurance of a conventionally powered submarine, enabling it to remain underwater three times longer than one without it.

But India’s finance and defense ministries disapproved of DCNS’s proposal on the grounds that an AIP was already being indigenously developed by the Naval Materials Research Laboratory of the MoD’s Defense Research and Development Organisation (DRDO). DRDO also believes that its AIP can be retrofitted on the Scorpenes.

To mitigate the impact of the leak, Indian authorities are delaying the commissioning of the first of the Scorpenes until after December 2016. The Indian Navy has also scotched all speculation of a follow-on order for the construction of three more Scorpenes from DCNS.

It also remains to be seen whether DCNS will be countenanced for the lucrative US$11.1 billion contract to construct six new generation stealth diesel-electric submarines. The tender requires the submarines to be built in India.

India has also been the victim of a similar military leak in the past. In 1981 it awarded a US$6 million contract to German submarine manufacturer, Howaldtswerke-Deutsche Werft (HDW), for the supply of four submarines. The four HDW submarines have now been in use in the Indian Navy for 22–30 years, though the prescribed operational life of a submarine is around 25 years.

The leak derailed India’s submarine program and its submarine construction infrastructure — comprising three large workshops and a dry dock — have fallen into disuse. The training and skills imparted to Indian personnel and naval architects were also lost over these years. The yard had to begin anew after it secured the contract to build the Scorpenes in 2005.

HDW was ultimately absolved of its trespasses and was acquired in 2004 by Thyssen-Nordseewerke, forming the new group ThyssenKrupp Marine Systems (TKMS). India has now awarded TKMS a US$38 million contract to modernise two of the HDW submarines.

TKMS will be redoubling its efforts in India after it failed to win the Australian contract that went to DCNS despite vigorous lobbying by ­German officials, including Chancellor Angela Merkel.

After the DCNS Scorpene debacle, it is clear that confidentiality and information security will be important factors in determining the outcome of future military tenders.