Why Is Iran's Foreign Minister So Angry? 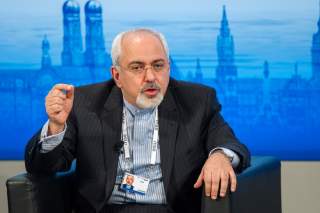 Nuclear negotiations that once contested questions of access and verification now seem to be turning into a contest of measurement—and those aren’t uranium stockpiles they’re measuring. Yesterday, Russian and Iranian media outlets reported a string of bombastic outbursts from their nations’ top diplomats in disputes over the removal of the United Nations Security Council’s arms embargo on Iran. The Russians and Iranians want the arms embargoes lifted; the U.S. and others want some restrictions to remain. After European Union foreign policy head Federica Mogherini suggested the talks could end over Iran’s intransigence, say the reports, Iranian foreign minister Mohammad Javad Zarif shouted back, “Never threaten an Iranian!” “Or a Russian,” Russian foreign minister Sergey Lavrov is said to have added. Zarif and U.S. secretary of state John Kerry are also reported to have been shouting at each other so loudly one night that other delegations in the hotel could hear; on another occasion, when Western negotiators raised the issue of Iran’s destabilizing role around the Middle East, Zarif “erupted” that “If we are talking about regional security, I should take every one of you to international courts for supporting Saddam” in the Iran-Iraq War.

It’s no surprise that the nuclear talks would see some of the negotiators losing their tempers—after all, the issues at stake reach into the core of the parties’ visions of their own security and dignity—and this isn’t the first time Zarif has been accused of indelicacy. Yet it’s only now that we’re hearing just what Zarif is shouting about. All leaks from the talks should be treated as deliberate efforts to cultivate an image, since the negotiators are typically tight-lipped. These revelations are particularly suspect, given that they come via interested parties’ state media and that they make little sense in the negotiation room and lots of sense as efforts to rally nationalism. An Iranian lawsuit against key Western states over a war three decades ago would only deepen Tehran’s isolation—precisely the opposite of what Zarif and his president, Hassan Rouhani, are trying to achieve by negotiating. And Zarif and Lavrov’s appeals to proud national “character” probably weren’t going to move an elite bureaucrat of a politically correct, postnational outfit like the European Union. Yet raising the Western role in supporting Iraq is red meat for Iranians across the political spectrum, as that inhuman and deadly war remains an open wound. And tough talk about standing up to threats? That’s a universal political language, and it seems to have hit its mark in Iran. These leaks were about public positioning, not diplomatic gain.

And what’s the positioning mean? That’s hard to say, but it may have been multipurpose. A successful deal will include controversial concessions, so it’s useful for the negotiators to make a show of how patriotic they are and how hard they’re pushing the other side. And if the talks break down, the negotiators will be accused of being soft for having engaged with the United States in the first place. Highly visible shows of patriotism and machismo can mitigate that damage. And Zarif is a moderate, technocratic figure with no real war record or natural political base in Iran. If the negotiations succeed, he and Rouhani will be rock stars for many Iranians; Zarif’s remarks might help him capture a little more of the spotlight. He’s denied ambitions for higher office. Even if he was telling the truth, adoring crowds have a way of changing men’s minds.

Political scientist Robert D. Putnam once wrote that diplomacy is a two-level game—negotiators aren’t just negotiating with other countries, but with their own domestic system. At the level of international diplomacy, Zarif’s conduct looks unprofessional and intemperate—hard to explain from a man who’s been doing diplomacy for decades and who’s rarely photographed without a smile on his face. As domestic politics, though, it’s much more understandable. While the international level of the talks has been dominated by arcane technical questions, the domestic level is simple and volatile, with symbols and emotions mattering far more than, say, questions about whether Iran can turn uranium hexaflouride into uranium dioxide by this or that day. This apparent Russo-Iranian bid to make moves on the international level that get results at the domestic level suggests that something big may be upon us—whatever it is.