Why Israel Is Testing Its Arrow 3 Interceptor Missile—in Alaska 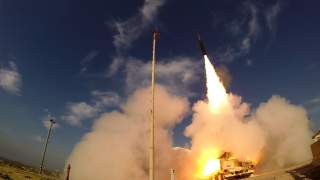 Fearing an Iranian ballistic-missile strike, it’s no surprise that Israel is planning another test of its Arrow 3 antimissile interceptor.

However, the location of the test is a surprise. Rather than being tested in Israel, the Arrow 3 will be launched from Alaska next year.

The test will be managed by the U.S. Missile Defense Agency (MDA) which has been jointly funding the Arrow 3 with the Israeli Missile Defense Organization since 2008. “MDA will test the U.S.-Israeli Arrow 3 missile defense system from the Pacific Spaceport Complex in Kodiak in 2018,” confirmed MDA spokesman Christopher Johnson.

Why move the test from the sunny Mediterranean to cold Alaska? The answer appears to be geography. Israel’s Mediterranean backyard is too small for testing an exoatmospheric missile like Arrow 3, which intercepts its targets while they are in space and before they reenter the atmosphere. The Arrow 3 reportedly has a slant range of 1,500 miles and is able to intercept targets more than sixty-two miles high.

“That interceptor is now up into the exo-atmosphere and it has significant range constraints within the Mediterranean,” MDA chief Vice Adm. James Syring told the House Armed Services Committee last month. “And one of the—one of the better places to test is in Alaska from Kodiak and we plan to do that next year.”

Launching an Arrow 3 from Alaska will also enable the missile to fly over the Pacific instead of the Mediterranean, and thus avoid overflying neighbors who might be touchy about an Israeli missile streaking overhead.

The U.S. government has been cooperating with Israel on the Arrow project since 1988 (in 2012, Boeing signed an agreement with Israel Aircraft Industries to develop the Arrow 3). Israel currently deploys two batteries of the Arrow 2, a medium-range interceptor that can hit Scud-like ballistic missiles at an altitude of about thirty miles.

The U.S. has spent $743 million on Arrow 3 funding since 2008, but there are no plans for the weapon to be added to the American missile defense arsenal. Instead, America has developed its own—and troubled—Ground-Based Midcourse Defense system (GMD).

GMD relies on forty-four Ground-Based Interceptors (GBI) emplaced in silos in Alaska and California. When asked about the differences between the Arrow 3 and the U.S. GBI, the Missile Defense Agency suggested that the National Interest contact the Israelis.

Both the Arrow 3 and the GBI destroy incoming missiles by slamming into them with guided space darts, rather than blowing them up with explosive warheads. However, the GBI is bigger and has a longer range than the Arrow 3, says Tom Karako, a missile defense expert at the Center for Strategic and International Studies. “Defended area is the important metric,” Karako told the National Interest. “And GBIs can defend all fifty states.”

Why is the United States funding Israeli missile-defense research? MDA declined to answer how the Arrow 3 project has benefited U.S. missile defense. America tends to support Israel out of tradition, but Washington can benefit from Israel’s expertise in missile defense. Afterall, it’s the only nation whose missile defenses have regularly seen action, albeit on a limited scale through Iron Dome intercepts of short-range Hamas rockets.

The United States and Israel find themselves in a common dilemma. Both nations are stronger than their potential adversaries. Yet those adversaries, especially Iran and North Korea, have developed ballistic missiles as an asymmetric way to compensate for their inferiority in conventional warfare. Missile defense is an interest they will continue to share.

Image: The Israel Missile Defense Organization (IMDO) of the Directorate of Defense Research and Development (DDR&D) and the U.S. Missile Defense Agency (MDA) conducted a successful first engagement of a ballistic missile target with the Arrow-3 interceptor.​