Superpower in the Sky: Why Israel Wants F-35s and Deadly New F-15s 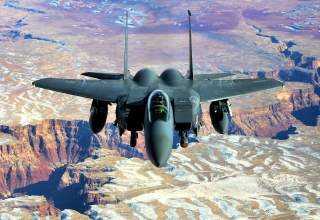 Although the F-35 saw its first combat duty this week in Israel, the Jewish state has reportedly decided to purchase more of the most advanced version of Boeing’s F-15 rather than buy more Joint Strike Fighters.

On May 16, Flight Global—an aviation-focused news source—reported that Israel is proposing a deal to purchase twenty-five F-15Is in an advanced configuration. This would double the number of F-15Is the Israeli Air Force (IAF) currently operates. As part of the proposed nearly $4 billion deal, Boeing would also modernize Israel’s existing twenty-five F-15Is to bring them up to the same level as the new ones.

Although the Global Flight report doesn’t specify, it seems to be referring to the recommendation made by the head of the IAF, Maj. Gen. Amikam Norkin. Reports earlier this year said that his recommendation was supposed to come sometime in May. The IAF’s recommendation has to be approved by the General Staff and a ministerial committee. But, according to the previously mentioned Haaretz report, “the recommendation of the air force generally carries the day.”

If accepted, this means that Jerusalem has decided against buying another squadron of F-35s for the time being. As I’ve mentioned before, there has been an ongoing debate within Israeli defense circles about whether the country should purchase more F-35s or else increase its fleet of F-15Is. The debate has basically centered on the value of stealth compared with the value of weapons loads. To the F-35’s credit, it is stealthy and can fly undetected by enemy radars. To do this, however, it can’t carry bombs outside its bay, limiting the amount of munitions it can carry.

In some ways, then, the F-35 and the F-15Is complement each other nicely. Israel’s plan, according to media reports and general logic, is that the F-35s will be used at the start of a conflict to wipe out enemy radar and air defense systems. Once these have been eliminated or greatly diminished, Israel will use its F-15Is and other nonstealthy planes to continue the bombing. Some in the Israeli Air Force believe that the fifty F-35s Israel has already signed on to purchase is sufficient for performing this mission (and other missions where stealth is necessary). Therefore, they believe Jerusalem should prioritize purchasing more of the F-15Is and upgrading its existing fleet while delaying the purchase of another squadron of F-35s. It’s worth noting that Israel wouldn’t be able to later purchase the F-15s if it purchased F-35s first because Boeing is close to shutting down production lines.

Haaretz, a left-leaning Israeli daily, said there are a number of other perceived benefits of the F-15I compared to the F-35. For starters, it can carry larger bombs that could be useful against certain targets. Secondly, the F-15Is have a longer range. Third, they are currently cheaper to operate than the Joint Strike Fighters although it’s unclear if this will still be true after the F-15Is are upgraded. Finally, some in the IAF believe having a mix of planes is preferable to relying overwhelming on one platform like the F-35.

Not everyone agrees with this logic, of course. Retired Brig. Gen. Assaf Agmon, a former IAF fighter pilot who also served in command positions, told Breaking Defense that this view fails to appreciate what a game-changer the F-35 is. “The F-35 is not just another aircraft, it brings a total revolution in the interoperability of air, ground and sea sensors” Agmon said. He also disagreed that Israel needed more planes that can carry large weapons’ loads. “The Israeli defense forces have enough ways to use massive fire power against faraway targets.”

Israel’s current fleet of F-15Is are based on Boeing’s F-15E Strike Eagle variant. They indeed have impressive range. As Global Security, a military information website, pointed out, “In August 2003 the Israeli Air Force demonstrated the strategic capability to strike far-off targets such as Iran [which is 1,300 kilometers away], by flying three F-15 jets to Poland 1,600 nautical miles away.” The F-15E Strike Eagle is also optimized for both air superiority and strike missions.

The modernized F-15Is are expected to be based off Boeing’s latest model of the plane, the F-15 Advanced Eagle. This will bring several new features, including more firepower, as the upgraded version can carry sixteen additional Advanced Medium-Range Air-to-Air Missiles (AMRAAM). Other new features found on the F-15 Advanced Eagle, according to Tyler Rogoway, include “full fly-by-wire flight control system, APG-63V3 Active Electronically Scanned Array (AESA) radar, digital electronic warfare and radar warning suite, missile launch detection system, updated flat-panel display cockpits with helmet mounted displays in both cockpits and an infrared search and track system, known as ‘Tiger Eyes,’ built into the left intake targeting pod pylon.” Israel’s fighter jets, including the F-35, typically come with some features that are unique to that country.