Why Israel's New F-35 Stealth Fighters Are a Game-Changer 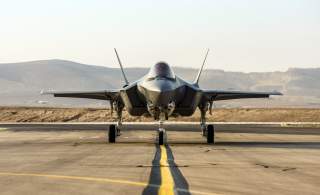 Something changed in the region last December, when Israel declared its first squadron of F-35s operational. Numerically, the change seemed minor. The Israeli Air Force's (IAF) 140 ("Golden Eagle") Squadron has just nine F-35I Adir aircraft, scheduled to grow to fifty over the next three years. That's a small number compared to the roughly 300 F-15s, F-15Es and F-16s currently operated by the IAF.

But the significance of Israel's F-35s is more than numbers. First, there is the simple qualitative advantage. Nationalists and propagandists can argue the merits of the F-35 versus the latest Russian MiG and Sukhoi fighters. What matters here is that neither Iran nor Syria are likely to get the most advanced Russian fighters or antiaircraft missiles (it took Iran ten years before it received Russian S-300 long-range anti-aircraft missiles in 2017). The F-35 is superior to Iran's collection of F-14, MiG-29s, and F-4 Phantoms, Syria's MiG-29s and Egypt's F-16s. There is a remote possibility that Israeli F-35s could confront Russian Su-35s (which Russia claims scared off U.S. F-22s) over Syria. But otherwise, Israel has and will continue to have the most advanced combat aircraft in the region.

Then there is the stealth factor. It has been almost thirty-six years since Israel last conducted a major air campaign against an opponent possessing a respectable air force. Now the IAF spends its time conducting pinprick raids with a few aircraft against a Hezbollah arms convoy here, a Hamas weapons dump there. Even a handful of stealth jets will enable Israel to conduct sneak raids over Syria—or even Iran.

Critics can rightly point out that technological advantages like stealth are fleeting. Perhaps Israel's enemies will develop, or receive from Moscow, the capability to detect and defeat the F-35. All of which may be true, but which also misses the point.

Israel is locked in a perpetual state of deterrence with its neighbors, all of whom are enemies now or could easily become enemies again. In particular, Israel is threatened by rockets and ballistic missiles from Iran and Hezbollah, who in turn are threatened by the prospect of Israeli retaliation. Israel's F-35s add uncertainty to the mix. That Israeli aircraft could reach Iran, and routinely strike Hezbollah and Syria, is no secret. But Iran now has to wonder whether Israeli F-35s can stealthily penetrate Iranian defenses (and note that the Israeli specially modified F-35I has extra fuel capacity).

Whether or not the aircraft can successfully accomplish this doesn't matter in this context. It's only whether Iran believes it can, and whether this will affect Tehran's actions.