Why Its Time to Prepare for the Worst with North Korea 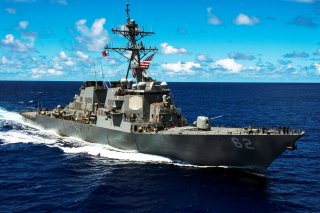 Failure is an option, especially when it comes to U.S. policy towards North Korea. Decades of diplomatic efforts have failed to de-nuclearize and pacify Kim Jong Un’s regime while parallel efforts to deter small-scale conventional and large-scale cyber-attacks have also failed.

Despite these failures, however, U.S. policy-makers appear to still be enamored with the idea of getting up, dusting themselves off, and going for one more spin on the North Korean nuclear merry-go-round: provocation, emergency U.N. Security Council meeting, a new round of sanctions, failure of diplomatic talks, provocation, ad infinitum.

There are ways to break this cycle and achieve some form of success, options which the Trump administration appears to be considering.

However, while the Trump administration hopes for success in these endeavors, it should not forget to prepare for failure. Previous failures in U.S. and allied diplomacy and deterrence have led to dozens of deaths and millions of dollars in damages. Future failures could lead to the death of millions and damages measured in trillions of dollars.

To begin, U.S. and allied policy-makers must examine why deterrence has failed, or nearly failed, in the past. For example, during the Cuban Missile Crisis in 1962, Cuban leaders Fidel Castro and Che Guevara both lobbied for the use of Soviet nuclear weapons against the United States to advance the cause of the “socialist camp.” The Cuban leaders were rational in their own atypical non-Western way but were willing, even eager, to die for their cause. Kim Jong Un may not be all that different. His provocations may look crazy to the Western mind, but coldly rational to him.

The difficulty of deterrence is that it does not work in the same way universally, considering the diverse set of cultural values that each foreign leader holds. Demonstrating this reality in an academic setting, researchers in comparative psychology recently showed East Asians and Westerners the same picture for a short period of time and then asked the subjects what they remembered about the picture. The two groups, who saw the exact same picture, gave very different answers, in part, due to their cultural values which compelled them to focus on some things in the picture and not others.

This same dynamic recently manifest itself on the Korean peninsula. A few weeks ago, the U.S. military made the decision to withhold U.S. bombers from bilateral exercises with the South Koreans to signal North Korea its willingness to de-escalate the situation. Days later North Korea tested its largest-yield nuclear weapon ever. In the words of General Vincent K. Brooks, Commander of U.S. Forces Korea: “Apparently the changes in the exercise did not matter.” Both sides saw the same picture but gave different answers.

In fact, there is very good evidence that North Korean leaders hold dramatically different cultural values than the United States, namely, their elevation and devout protection of their leader’s “honor.” U.S. leaders regularly accept offenses to their honor as the price of politics. However, East Asian cultures in general, and North Korea, in particular, hold honor in much higher regard and are willing to go to greater lengths to defend it. This has major implications for the failure of deterrence and diplomacy.

Recognizing that deterrence and diplomacy can fail, the United States should take political and military steps now in order to lessen the effects of failure.

Should military deterrence fail, for instance, the United States must be able to confidently intercept North Korean nuclear missiles at all feasible ranges. This means Congress must fund further R&D on missile defense systems, strengthen joint-technology development with Japan, accelerate work on the “multi-object kill vehicle,” and improve radar and satellite detection capabilities. Hardening military bases on Guam and Okinawa would similarly signal the futility of attacking U.S. forces.

Should diplomacy fail, the United States should broaden its sanctions beyond North Korea to any country that significantly supports North Korea economically. Begin with the smaller supporters like Mozambique, the Democratic Republic of the Congo, Sudan, Namibia, and Uganda. Then gradually increase to larger supporters like Iran, Russia, and finally, China.

In addition, the United States should support the greater use of naval interdiction missions under the Proliferation Security Initiative and encourage states not party to the Initiative, like China, to set aside political opposition for security cooperation.

Secretary of Defense Jim Mattis and Secretary of State Rex Tillerson have pledged to hold North Korea accountable for its actions, using all the diplomatic and military means at their disposal. The world wishes them the best. But lest they become too reliant on hoping for the best, they should also prepare for the worst.

Matthew R. Costlow is an analyst at the National Institute for Public Policy and a Ph.D. student at George Mason University.