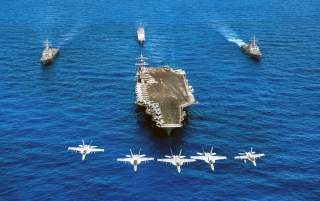 In short, the carrier strike group was a concept befitting that brief, ahistorical interlude after the Cold War when no one could contest American command of the sea or saw much interest in doing so. That historical interlude has passed, and more normal—if more trying—times have returned. These days calling a carrier-centric formation a carrier strike group broadcasts a false message to key audiences about the state of seaborne competition. Worse, it bespeaks hubris, a cardinal sin for any naval commander. It suggests the U.S. Navy still owns the sea, and can venture where it will without opposition.

Would resurrecting the carrier battle group represent a cure-all for all that ails U.S. maritime strategy? Of course not. But rebranding and reconfiguring U.S. naval forces would constitute a modest measure that announces to many audiences that the sea services are getting in phase with competitive times. And Machiavelli and Boyd would smile.