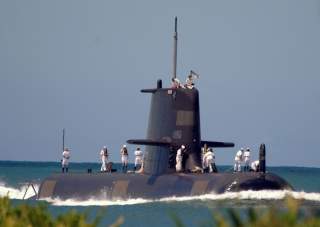 With the outcome of the long-awaited SEA 1000 Competitive Evaluation Process seeing France’s DCNS announced as the international design partner for the future submarines, Australia must now manage the diplomatic fallout with the two failed bidders: Germany and, especially, Japan. As David Lang notes, ‘we should expect the CEP outcome to dampen the energy and enthusiasm that’s driven the bilateral relationship for much of the past two and a half years.’ There may also be disappointment in key defence circles within the US, given the very real strategic benefits that would’ve flowed to the Australia–Japan–US trilateral. But Japan’s lost bid isn’t simply a bilateral challenge for Australia–Japan defence and foreign relations. Australia has to manage China’s reaction.

The outcome is likely to have pleased Beijing, (and here) given that ‘Option J’ would have opened the doors to a greatly expanded strategic partnership between Tokyo and Canberra—both allied to the US. Paul Dibb summed up the situation:

"Beijing must be rubbing its hands with glee that we are not buying submarines from its adversary, Japan…there is every possibility that the harsh authoritarian leadership under President Xi Jinping considers it has successfully bullied Australia to kowtow to its demands."

It’s ironic that despite China’s probable happiness at Japan’s loss, Australia’s ability to operate alongside the US and Japan to counter Chinese naval forces will increase with this decision—albeit far too slowly in a rapidly changing security environment.

However, in managing strategic policy, perceptions really matter. It’s unconvincing to suggest that the Turnbull government has chosen ‘Shortfin Barracudas’ over ‘enhanced Soryus’ in part because of a fear of angering Beijing, but Australia can’t allow the perception that Beijing has a veto over Australian defense and foreign policy gather strength. The best way to burst Beijing’s prospective bubble in this issue is to move decisively to repair any damage with Tokyo through visible and concrete policy measures that strengthen the ‘special strategic partnership’. That’s vital, given increasing uncertaintyover the US role in Asia (let alone under a possible future Trump Administration), and China’s more assertive posture in the South China Sea.

In this worsening strategic environment, the old motto ‘united we stand, divided we fall’ is more relevant than ever. Failing to follow up the CEP outcome with new approaches to Japan for fear of entrapment would incentivize greater Chinese assertiveness at the expense of its neighbors—America as well as Australia. A policy of deterrence and dissuasion, matched by constructive engagement, is the best approach to take with regards to China, and closer defense relations between Japan and Australia should be a cornerstone to that.

To do this, Australia must develop closer cooperation with Japan (alongside the US) on ensuring Freedom of Navigation through joint Freedom of Navigation Operations (FONOPs) in the South China Sea. It can pursue cooperation alongside Japan in capacity building for security partners in the South China Sea that are facing a challenge from China—such as the Philippines and potentially Vietnam—through strengthening maritime domain awareness and ensuring sea lane security. The development of a Theater ASWcapability between Japan, Australia and the US would strengthen our ASW advantage over China’s submarine fleet. Dialog on Ballistic Missile Defense could contribute to countering China’s increasing anti-ship ballistic missile and land-strike capability.

Australia should also seek defense cooperation with Japan in operations and sustainment of the F-35, and in particular through provision of access to the Woomera Test Range in South Australia for combined training with the Japanese Air Self Defense Force. Beyond the F-35, Japan is developing its X-2 stealth demonstrator for the future F-3 stealth fighter program that could support a future bid to replace the RAAF F/A-18Fs in the 2030s.

In space, networked commercial satellites owned by Japan and Australia can contribute towards information sharing across common C4ISR networks. In the face of growing PLA information warfare capabilities, Japan, Australia and the US should seek to work collaboratively to build resilience in cyberspace and across the electromagnetic spectrum. Trilateral cooperation in pursuing technologies related to the ‘Third Offset’ strategy led by the US could bring in many of these capability areas in a way that would more than address any gaps in the Australia-Japan relationship left by the submarine decision.

China will clearly react negatively to such cooperation, or indeed to other opportunities that Canberra and Tokyo choose to pursue. Australia must resist the temptation of submitting to such threats, particularly as competition between China and the US intensifies. Instead, Australia should move decisively to reinforce defense ties with Tokyo in a manner that emphasizes a strong and enduring strategic partnership for the future.