Why Militaries the World over Still Use Grenade Launchers 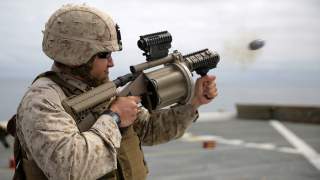 By 1953, Project Niblick had its ace in the hole: the 40mm grenade. In the years that followed, that first “40 Mike-Mike” birthed a generation of aluminum-encased ordnance for a variety of launchers and payloads, from high explosives to buckshot to white phosphorous to parachute flares and non lethal rounds.

The new kid in town