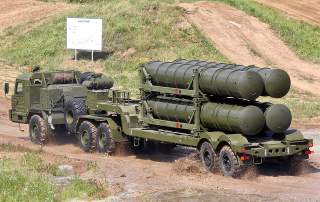 On February 21, 2017, Russia’s Ministry of Defense announced that yet another Aerospace Forces surface-to-air missile (SAM) regiment equipped with the lethal S-400 Triumf system was put on combat duty in the Moscow Oblast. Stationed in Solnechnogorsky District, the 584th SAM Regiment is the fifth regiment in the Oblast to be re-equipped with the S-400, bringing the total number of Triumf battalions deployed around the capital to 10 (two per regiment). In other words, more than one out of four S-400 battalions currently in service with Russia’s military is now stationed not far from Moscow City.

Given that a single S-400 battalion typically comprises eight transporter-erector-launcher (TEL) vehicles, the total number of S-400 TELs in the Moscow Oblast amounts to approximately 80 - a large figure by any standard (even when taking into account that a small number of these TELs were deployed to Syria in 2015 along with other system components). The Triumf, however, isn’t the only SAM system deployed by Russia’s Aerospace Forces in the Oblast. In addition to the ten S-400 battalions, each of the five regiments includes a battalion of Pantsir-S1/2 short-range gun-missile systems intended to defend the S-400 and other important assets against precision-guided weapons. Two of the S-400 regiments also include a battalion of older - but still formidable - S-300PM-series SAM systems. A further three S-300PM-series SAM regiments are likewise stationed around the capital.

Together, these eight SAM regiments (along with two radio-technical regiments) make up the 1st Air and Missile Defense Army’s 4th and 5th Air Defense Divisions that serve as the last line of defense for Russia’s political and military leadership. Russian military officials have expressed particular concern regarding low-flying cruise missiles and emerging hypersonic weapons, and have taken steps to improve the S-400’s ability to detect and intercept them. These steps include the continued deployment of mast-mounted and mobile 96L6 “all-altitude” acquisition radars capable of detecting targets at altitudes of up to 100km (60 miles), as well as the integration of new long-range, high-speed 48N6DM and 40N6 missiles with maximum operational ranges of 250km (155 miles) and 400km (250 miles), respectively (the latter, however, is likely not operational yet).

The high mobility, short deployment times, sophisticated radars and advanced missiles of the aforementioned “double-digit” SAM systems have led many senior Russian military officials to express great confidence in their ability to repel aerial attacks against Russia’s capital. In April 2015, for example, then deputy chief of Russia’s Aerospace Defense Forces, Major-General Kirill Makarov, told Russian News Service that, thanks to the addition of new SAM systems, “Moscow is covered from strikes by an aerial opponent with a probability of 99%.” When asked by the interviewer whether Russia’s air defense can detect stealth aircraft, the Major-General replied that, at present, there are no stealthy “means of aerial attack” which they cannot detect. Makarov’s remarks were echoed several month later by Major-General Sergei Babakov who called US stealth aircraft a “publicity stunt.” Such remarks, however, are highly conclusory.

While Russia’s double-digit SAMs pose a serious threat to non-stealthy aircraft, their capabilities against very low observable cruise missiles and aircraft remain very limited. As The National Interest previously noted, “solving the problem of targeting low observable aircraft is something [the Russians] continue to work on - but it is doubtful [that] Moscow has resolved the issue.” Indeed, even Russia’s upcoming S-500 Triumfator-M is unlikely to offer meaningful improvements in this field over its predecessors; the new system is most probably oriented towards defense against ballistic missiles and emerging hypersonic weapons instead. A prototype of the S-500 is expected to be completed by 2020, and the first operational regiment - intended to defend Moscow and the Central Economic Region - will likely become operational sometime in the early 2020s.

Guy Plopsky holds an MA in International Affairs and Strategic Studies from Tamkang University, Taiwan. He specializes in air power, Russian military affairs and Asia-Pacific security. You can follow him on Twitter.