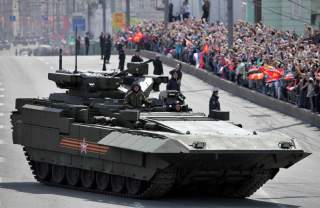 While the T-14 main battle tank is the most prominent member of the Armata family, the vehicle series incorporates a host of new fighting machines. Among those is a platform ominously named the Terminator-3, which is a tank support fighting vehicle.

“Russia also plans to develop its tank support fighting vehicle dubbed the Terminator-3 on the basis of the country’s latest Armata tanks,” Oleg Sienko, a senior manager with Uralvagonzavod Corporation told state-owned RIA Novosti earlier this year. “We will [produce them]. We have a concept for developing vehicles on the basis of the Armata platform.”

However, Sienko did not provide any additional details about the new combat vehicle other than the fact it would be based on the Armata chassis. Previous iterations of the Terminator—or more formally the Boyevaya Mashina Podderzhki Tankov—series were based on the T-72 main battle tank chassis.

There is no direct analogue to a “tank support fighting vehicle” in the U.S. Army. Perhaps the nearest equivalent is the M3 Cavalry Fighting Vehicle (CFV) variant of the long-serving Bradley—but it’s a poor comparison at best. A potentially closer comparison might be the Israeli Namer—which is based on a Merkava 4 tank chassis—but the Russian machines are not designed to carry troops. Perhaps the best historical equivalent in terms of roles and missions might be the World War Two-era German Brummbär or Sturmtiger assault guns.

The Terminator-3—and the two previous Terminator vehicles—are  heavily armed machines designed to support tanks in combat against both other armored vehicles and dismounted infantry in difficult terrain. The Red Army—and later the Russian Ground Forces—developed the series based on the lessons it learnt from Afghanistan and Chechnya.

The idea was to build a vehicle with the protection of a main battle tank, but which had the ability to engage enemy armor, bunkers and infantry in hiding in elevated positions. Indeed, every version of the Terminator built to date has the armor protection equivalent to—or better—than a main battle tank.

Generally speaking, the Russians employ BMTP vehicles alongside with their main battle tanks in the same unit in combat. On the open battlefield, there would normally be a pair of tanks accompanied by a BMTP. However, in particularly mountainous or constrained environments such as a city, the ratio would be reversed. Two BMTP would accompany a tank such as the T-72 or T-90.

The first BMPT was only built in limited numbers with the Russian Ground Forces only accepting a small batch into service for testing purposes in 2005. The second Terminator—BMPT-72—was a more refined design that reduced crew size to three while also cutting down on vehicle weight. The BMPT-72 Terminator-2 is heavily armed with four laser-guided Ataka-T anti-tank missiles, a pair of 30mm 2A42 automatic cannons and a PKTM coaxial 7.62mm machine gun. The previous version also had 30mm grenade launchers—but those were deleted on the BMPT-72.

Thus, while there are no details available about the Terminator-3, one can infer that it will likely share its chassis, sensors, passive armor, reactive armor and active protection system with the T-14. It will also likely carry an armament that consists of modern anti-tank missiles and a heavy automatic cannon armament.  However, there are few concrete details available thus far. Nonetheless, it’s safe to assume it will be a formidable adversary.