Why No Nation Wants to Battle America's B-2 Stealth Bomber 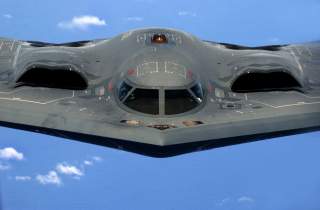 “In conjunction with the Libyan Government of National Accord, the U.S. military conducted precision airstrikes Wednesday night destroying two ISIL camps 45 kilometers southwest of Sirte,” outgoing Pentagon Press Secretary Peter Cook said in a statement. “The ISIL terrorists targeted included individuals who fled to the remote desert camps from Sirte in order to reorganize, and they posed a security threat to Libya, the region, and U.S. national interests. While we are still evaluating the results of the strikes, the initial assessment indicates they were successful.”

While the Northrop Grumman-built stealth bomber might seem like it would overkill to hit targets inside permissive airspace where there is no air threat or surface-to-air threat, Air Force officials said that there are circumstances that could have made the B-2 ideal for the strike. Nonetheless, the Air Force didn’t necessarily choose the B-2 itself, such assets are usually requested by the combatant commander.

“These things get ‘requested’ from the AOR [area of responsibility]—not ‘pushed’ by Big Blue,” an Air Force official told me. “Certainly, the USAF is happy to provide forces that they invest a lot of time and effort into lobbying for investment from Congress. We saw that both in OOD [Operation Odyssey Dawn] and when the Raptors were used in Syria—but not Libya—too. This isn't about being choosey about the platform so as to maintain a narrative of relevance.”

The Libya raid also likely demonstrated some new capabilities that the U.S. Air Force has been developing for the stealth bomber—coordination between drones and the B-2. “There is now a RPA squadron at Whiteman AFB, so the crosstalk has been there for a couple years,” the Air Force official said. “The RPAs being present to handle the [survivors] after a B-2 pass, it has been a dream of the community's tactics development experts—weapons officers—for a while now.”

Another feature that makes the B-2 attractive to military planners is that fact that the Spirit has excellent loiter capability—which means it can stay over an area for a very long time. “There are others that can do this too, for example the B-52 has more fuel capacity, and the B-1 has a slight disadvantage in terms of fuel efficiency,” the Air Force official said. “So, again, the confluence of factors really determine the B-2 as ideal despite being the ‘Stealth Bomber.’”

Another reason to use the B-2 in lieu of other bombers is its payload. While the B-1 can carry a larger payload, the B-2 has the ability to retarget its weapons much more efficiently and accurately in flight. “Sure the B-1 can carry more, but the global comm structure is better suited for the B-2 in this regard because of their airborne mission transfer capability that can rapidly reassign each bomb's designation with a new mission load in the air,” the Air Force official said. “An airborne mission transfer allows you to avoid having the crews type in new coordinates for each new bomb. The other platforms have some ways of doing this too, to varying extent, but not on the same scale, and not with a lot more effort and opportunity for human error.”

For a sensitive or fleeting target, real time—error free—updates can be invaluable. As such, the B-2’s ability to retarget its weapons more efficiently becomes critical. “Hypothetically, the B-2 takes off with target locations that cover the most up to date intelligence available. Then it gets some updates in the air: it can change a handful by hand, if necessary. Its vastly more easy to "no-strike" preplanned target locations than it is to add—by hand. If, again hypothetically, there becomes a lot of changes to be made, then it is much easier and reliable to use the machine-to-machine transfer capability,” as the Air Force official explained.

The U.S. Air Force’s tiny fleet of B-2s has been practicing these tactics since before the Kosovo war in 1999. “These things have been in the works for a while now,” the Air Force official explained. “The airborne mission transfer is something that gets practiced by the crews in almost every single long duration training flight. It’s a very unique capability/tactic in terms of the scale involved with retargeting even a handful of impact points for JDAM. Just imagine if you needed to do that with up to 160 impact points—each B-2 carrying 80 GBU-38s! Or if there are three B-2s in a strike package, 240!”