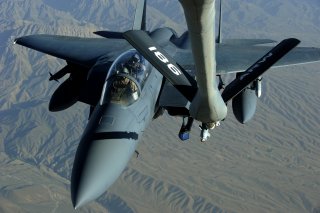 “Behind me to the north, an oppressive regime that shackles its people, denying their freedom, their welfare and their human dignity in pursuit of nuclear weapons in the means of delivery, in order to threaten other with catastrophe,” U.S. Secretary of Defense Jim Mattis said, speaking at the Demilitarized Zone (DMZ) between North and South Korea on Oct. 27.

“North Korean provocations continue to threaten regional and world peace.  And despite the unanimous condemnation by the United Nations Security Council, they still proceed. And as the U.S. secretary of state, Tillerson, has made clear, our goal is not war, but rather the complete, verifiable and irreversible denuclearization of the Korean Peninsula.”

“We also affirm that, although North Korea continues to develop nuclear weapon and missiles, but these are weapons that they should never be used,” Moon said.

“Should they ever use it, they will be faced with the strong might of the ROK-U.S. combined forces, and they will be met with a proportional and firm response. And we also strongly implore that North Korea stop its reckless provocations and come out toward the path of peace and dialogue.”

However, it is not clear what there is to negotiate.

The White House has made it clear that President Donald Trump will not tolerate a nuclear-armed North Korea that can strike directly at the United States with an intercontinental ballistic missile. Nor will the White House accept deterrence as a means of dealing with North Korea.

“The president has been extremely clear on his perspective on North Korea,” National Security Advisor Lt. Gen. H.R. McMaster said on Oct. 19 at the Foundation for Defense and Democracy.

“He’s not going to accept this regime threatening the United States with a nuclear weapon. He just won’t accept it. There are those who have said, ‘What about accept and deter?’ Well, accept and deter is unacceptable. So this puts us in a situation where we are in a race to resolve this, short of military action.”

The North Korean position is also similarly intractable. On Oct. 11, North Korean foreign minister Ri Yong-ho accused Trump of lighting the “fuse of war” against Pyongyang and reiterated that the Democratic People’s Republic of Korea would never give up its nuclear weapons.

“We have nearly achieved the final point on the way to our ultimate goal, to achieving a real balance of force with the United States,” Ri said.

“Our nuclear weapons will never be a subject matter of negotiations as long as the United States’ policy of pressure on the DPRK has not been uprooted once and for all.”

Most foreign policy analysts agree that a denuclearized Korean peninsula is not a realistic or achievable goal. A more realistic goal is a nuclear weapons and ballistic missile testing freeze, but that only works up to a point. If North Korea is close to perfecting an ICBM coupled with a miniaturized nuclear warhead, there is no incentive for Pyongyang to stop.

In the view of the Kim regime, only a nuclear arsenal—and one that can directly hit the U.S. mainland—is the only way Pyongyang can ensure the survival of its government. North Korea has learned the from the mistakes of Muammar Gaddafi regime in Libya that was toppled with the assistance of American airpower in 2011, despite have received security guarantees in exchange for giving up its weapons of mass destruction.

“[Kim Jong-un] He's not crazy. And there is some rationale backing his actions which are survival, survival for his regime, survival for his country, and he has watched I think what has happened around the world relative to nations that possess nuclear capabilities and the leverage they have and seen that having the nuclear card in your pocket results in a lot of deterrence capability,” Director of National Intelligence Sen. Dan Coats said at the Aspen Security Forum in July.

Thus, short of military action—in this case a likely nuclear war—there is no denuclearizing the Korean peninsula. Essentially, the choice is binary—deterrence or war.